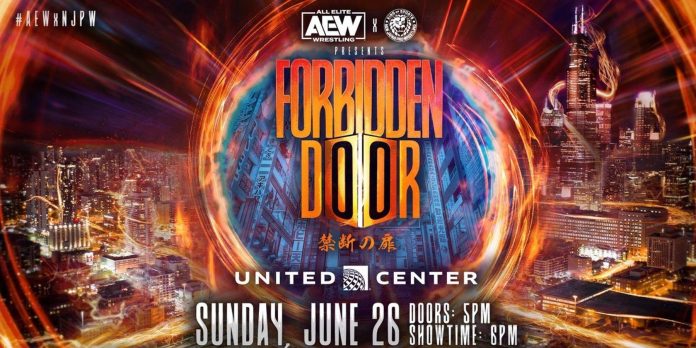 On the April 20 episode of Dynamite, All Elite Wrestling President Tony Han and New Japan Pro-Wrestling President Takami Obari were interrupted by Adam Cole, who announced that the two companies would collaborate to organize a pay-per-view event. The event was called the “Forbidden Door” in connection with the wrestling term, which is often used to refer to a participant who appears in one promotion, usually under contract with another. The announcement of the event left many dream matches that they once thought impossible.

The AEW and NJPW joint viewing card includes title defense in both promotions. AEW crowns the interim World champion, the first champion, and will present the defense of its AEW Women’s World Championship. NJPW will defend its three IWGP pay-per-view championships. The Ring of Honor Team Championship will also be played after Khan’s previous acquisition of the company. AEW and NJPW hope to make Forbidden Door an annual event, and how it goes will be a roadmap for future cross-events.

It was announced on Dynamite that Max Custer of The Acclaimed will team up with Austin, Billy and Colten Gunn to fight DKC, Kevin Knight, Alex Coughlin and Yuya Uemura in the Forbidden Door buy-in. DKC prepared for Forbidden Door by fighting HOOK in a one-on-one match on Rampage.

PAC vs. Miro vs. Malakai Black vs. Tomohiro Ishii

On June 8, AEW announced a tournament to crown the first All-Atlantic AEW champion, which aims to represent AEW viewers from more than 130 countries. Each participant of the tournament represented his country: PAC (Great Britain), Buddy Matthews (Australia), Miro (Bulgaria), Ethan Page (Canada), Tomohiro Ishii (Japan), Clark Connors (USA), Malakai Black (Netherlands). ) and Penta Oscuro (Mexico). There may be outside interference in the match, as the House of Black may intervene not only in the hope of helping Black, but also to avenge Matthews’ defeat in the first round.

Having created the Jericho Appreciation Society, Jericho did not forget about his problems with Kingston. Jericho’s ongoing feud with the Blackpool Fighting Club will continue after the Forbidden Door as factions compete in Blood & Guts. Utah and Umino will make an impressive team, given their close relationship with Moxley. Kingston will lead their team, and this confrontation will be the epitome of cruelty. After Suzuki’s former tag team partner Lance Archer formed an alliance with JAS, adding Suzuki to the match only makes it an even more brutal fight that no one wants to miss.

Is Zack Saber Jr. against???

After his team’s defeat at DOMINION, Saber Jr. called Brian Danielson for Forbidden Door. Unfortunately, Danielson announced that he was not allowed to participate in the competition for medical reasons, but chose an opponent who took his place and praised him for his technical skill. The comments added that the mysterious opponent will be a new member of the Blackpool Fighting Club. Among the list of potential opponents is the current ROH world champion Jonathan Gresham, Claudio or Johnny Gargano.

After winning the AEW Women’s World Championship in March, many were waiting for Rose to play a high-stakes match. Storm made her debut the same month, taking part in the Owen Hart Women’s Tournament. Despite losing to Britt Baker in the semifinals, Storm proved that she is a force to be reckoned with in the women’s division. Although technically none of the women have a contract with a Japanese promotion, Storm previously worked at Stardom. There, Storm won the Cinderella Tournament 2017, became the World of Stardom champion and the longest-serving SWA world champion with an impressive record of 612 days. In The Forbidden Door, Storm is aiming to win his first championship title since 2019.

Will Osprey (K.) vs. Orange Cassidy

In his surprise debut on AEW, Osprey continued the work of Great-O-Khan and Jeff Cobb, targeting Roppongi Vice and FTR. Opsrey, Kyle Fletcher and Mark Davis lost the match to Trent Beretta and FTR. The following week, Osprey defeated Dax Harwood, and after that there was a fight between Aussie Open, FTR and Roppongi Vice, but Cassidy interrupted it. Osprey and Cassidy will fight for Osprey’s IWGP USA title at Forbidden Door, and after Cassidy’s team win along with Roppongi Vice at Dynamite, he has momentum for the match.

On May 25, Dax Harwood and Cash Wheeler defended their ROH Tag Team championship against Trent Beretta and Rocky Romero. The match was interrupted by Great-O-Khan and Jeff Cobb before the winner could be determined.