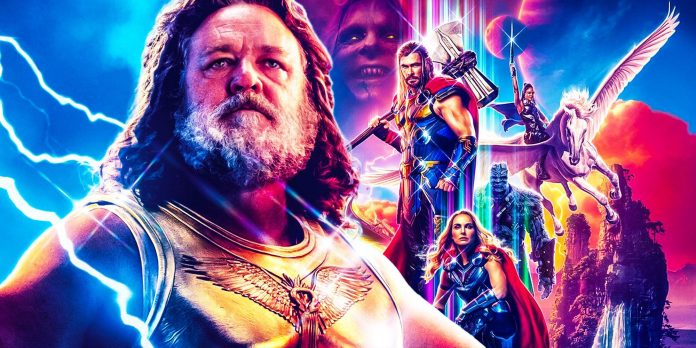 The world premiere of Thor: Love and Thunder happened, and the first social media reactions to the movie reveal quite a bit about it. For quite some time, plot details about the next Marvel movie had been kept tightly under wraps, prompting plenty of people to wonder when the marketing campaign would finally kick off. But kick off, it did, with the first few trailers revealing that Thor: Love and Thunder will be even bigger and more colorful than Thor: Ragnarok, which was already a stark departure from Thor’s previous movies.

After the events of Avengers: Endgame and the loss of his family, Thor has now hooked up with the Guardians of the Galaxy and is traveling with them in Thor: Love and Thunder. The God of Thunder wants nothing more than to find inner peace in a life away from superheroics. But his early retirement is interrupted in Love & Thunder by Gorr the God Butcher, a vengeful man who is hellbent on killing the gods for letting his family die. Thor has to strap on the armor one more time and bring together a team of heroes including Korg (Taika Waititi), Valkyrie (Tessa Thompson), his ex, Jane Foster (Natalie Portman), and his two very good (if screamy) goats, Toothgnasher and Toothgrinder, to save the gods of the universe.

Though Marvel has moved far away from its one-dimensional villain problem of the MCU Phase 1, a few of its more recent villains have been hit or miss. That appears to not be the case with Thor: Love and Thunder. Reactions have praised Christian Bale’s performance as Gorr the God Butcher. Simon Thompson of Variety says Bale is “a killer boogeyman blending the campy and the creepy.”

#ThorLoveAndThunder is a vivid and vibrant blast that delivers. Hemsworth’s Thor remains a jewel in Marvel’s crown. Bale’s Gorr is a killer boogeyman blending the campy and the creepy. Portman’s Foster and Thompson’s Valkyrie are a top notch pairing. Crowe’s Zeus is *chef’s kiss* pic.twitter.com/PDb5SZRWOo

Meanwhile, Kristen Acuna of Insider said Bale is “phenomenally menacing” as Gorr and that he gave her some “Dark Knight Ledger Joker vibes” at times. Erik Voss of New Rockstars says Bale’s performance “will wreck you.” Matt Neglia of Next Best Picture says Bale “slays it as the terrifying Gorr.” Hoai-Tran Bui of /Film echoes the terrifying aspect of Bale’s performance but also adds that he does “a million accents” in the movie, which is intriguing. Clearly, Christian Bale is just doing Christian Bale things and giving another memorable performance.

If audiences thought Thor: Ragnarok was entertaining, apparently it doesn’t hold a candle to Thor: Love and Thunder if reactions are to be believed. Marvel clearly let Waititi have the reins on this one, leaning even more into his distinctive brand of humor. Courtney Howard of Variety and The AV Club says that “Waititi delivers a subversive, irreverent spectacle.”

High praise for the humor came from Eric Italiano of BroBible, who claims Thor: Love and Thunder is “the funniest film in the MCU.” Clayton Davis of Variety assures that it “delivers big laughs.” Germain Lussier of iO9 says it’s like a peek into Waititi’s head: “Thor: Love and Thunder is like what I imagine living in the mind of Taika Waititi might be like. It’s wild, funny, [and] a little all over the place.” Joey Magidson of Awards Radar confirms “Taika Waititi knows how to make Thor a blast.” Lastly, Perri Nemiroff of Collider says Thor 4 is “a wacky, high energy delight” that delivers “LOADS of laughs.”

Thor: Ragnarok was a blast for audiences, but it did earn some criticism that the humor overshadowed a number of opportunities for the movie to show an equal amount of emotion and heart. That doesn’t seem to be the case with Thor: Love and Thunder, with a number of critics praising it for its surprising amount of heart and romance in between the laughs. Erik Davis of Fandango says Thor: Love and Thunder also offers “a hopelessly romantic story about discovering love in unexpected places.”

Another classic Thor adventure! #ThorLoveAndThunder is everything I wanted it to be. Big, colorful, weird Guns N’ Roses-fueled battles to go w/ a hopelessly romantic story about discovering love in unexpected places. Christian Bale & Russell Crowe are especially great. And Korg! pic.twitter.com/fu0gTUuMRj

Echoing that, Jacob Kleinman of Inverse says Waititi delivers “an emotionally mature Marvel movie.” Matt Neglia says that in between the laughs, it also tells “a profound story on absent gods & our desire for love.” Yahoo’s Kevin Polowy says Thor: Love and Thunder “had me choked up by the end.” And Eric Eisenberg of Cinemablend says it “balances heart and humor unlike any we’ve seen in the MCU.”

Last but not least, Thor’s goats, Toothgrinder and Toothgnasher, are getting lots of praise for being the very best boys of the movie. Likewise, Russell Crowe’s turn as Zeus has more than a few critics claiming he’s the secret scene-stealer of the movie. As Thanos might say, Thor: Love and Thunder appears to be perfectly balanced, as all things should be. Only two more weeks until the whole world can see for itself.