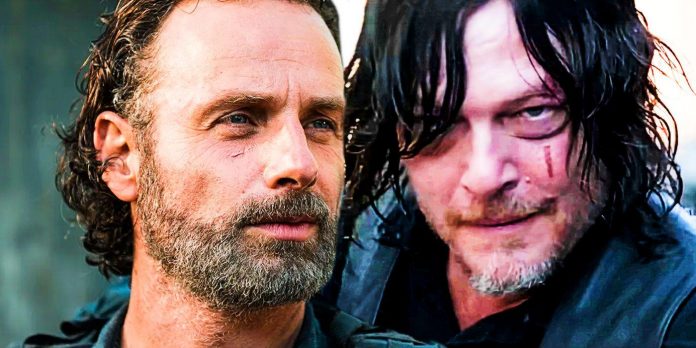 After 11 seasons, The Walking Dead TV show will soon come to an end, but there is plenty on the horizon for franchise devotees to look forward to, especially after the San Diego Comic-Con 2022 announcements. At one point in time, The Walking Dead was unquestionably the most popular show on linear TV, dominating its competition on cable and also outstripping the biggest hits on broadcast networks. While that was a long time ago now, The Walking Dead is still one of the most watched shows out there, despite its detractors’ mocking claims about how it should have long since ended.

The Walking Dead may not be the juggernaut it was at its peak, but it is still no wonder that AMC has no plans to get out of the Walking Dead business or truly end its story. It is one of the few shows that still feels like appointment viewing, and one that almost demands watching live in order to avoid spoilers. While The Walking Dead flagship program is winding down, AMC is betting that the millions who still consistently tune in will transition their fandom over to the parade of sequels and spinoffs on the horizon.

After a decade-plus and over 150 episodes, The Walking Dead season 11 begins its final chapter on October 2, with Comic-Con 2022 showcasing a trailer of the climactic show finale. Season 11 has seen a lot of change occur, with Maggie’s return as a regular cast member, her begrudging alliance with Negan, large time jumps, loyalties challenged, major character deaths, and the introduction of dangerous groups like The Commonwealth and The Reapers. With Daryl, Maggie, Aaron, Gabriel, Negan, and their comrades now firmly on war footing with Lance Hornsby, Pamela Milton, and The Commonwealth, The Walking Dead season 11, part 3 looks set to provide all the action, violence, and gore that viewers expect. As teased on The Walking Dead: World Beyond, faster and smarter zombies are also being thrown into the mix.

Fear the Walking Dead recently wrapped up season 7, but season 8 is already in the works and should debut during 2022. The final episodes of season 7 saw the surprising reveal that thought to be dead former lead Madison Clark (Kim Dickens) actually survived the explosion that seemingly killed her and had since begun working for the villainous PADRE collective. Going into season 8, Morgan and Madison are now tasked with recovering Morgan’s adopted daughter Mo from PADRE’s sinister clutches. Unlike its progenitor, Fear the Walking Dead has given no indication it will be ending anytime soon.

Tales of the Walking Dead

Comic-Con 2022 provided a trailer for Tales of the Walking Dead, which will see The Walking Dead hop onto the episodic anthology train in a manner similar to what American Horror Stories is to American Horror Story. Premiering August 14, Tales of the Walking Dead’s first season is set to consist of six episodes, each focusing on different characters, most of which are new to the franchise and played by recognizable actors like Terry Crews, Olivia Munn, and Parker Posey. Also taking the spotlight in flashbacks is Samantha Morton’s Alpha, who returns in an episode that looks at her transformation from a relatively normal woman named Dee into the savage Whisperer leader. There is a lot of potential for multiple seasons of Tales of the Walking Dead, especially when it comes to bringing back dead favorites.

Related: Walking Dead Season 11 Repeats Every Past Season (To Set Up Its Endgame)

The Walking Dead’s most popular character will get his own showcase when Daryl Dixon’s upcoming spinoff debuts on AMC. Norman Reedus is of course back in the lead role for Daryl’s still currently untitled spinoff, which was originally planned to focus on both Daryl and Carol. That changed when actress Melissa McBride opted to exit the project and take a break after more than a decade playing Carol. That said, Reedus mentioned at Comic-Con 2022 that the story of Daryl and Carol together is not over, seemingly leaving the door open for McBride to eventually return to the fold. This spinoff arguably has the most chance of taking over as the Walking Dead franchise’s lead program, essentially serving as an extension of the original show.

Isle of the Dead

After a season spent as reluctant allies, Negan and Maggie seem to have somewhat settled into the idea that they are on the same side now, although there will likely never not be some amount of tension there. Especially considering Hershel’s understandable anger that Negan killed his father. The Negan and Maggie relationship will be further explored in the spinoff Isle of the Dead, which sees the two hardened survivors head to Manhattan in New York City for so far undisclosed reasons. Stars Jeffrey Dean Morgan and Lauren Cohan actually missed Comic-Con 2022, but this was likely due to filming on Isle of the Dead commencing recently. This will actually be the third TV show Morgan and Cohan have both played major roles on, although their characters never interacted on Supernatural. They also famously played Bruce Wayne’s parents in Batman V Superman flashbacks.

While some Walking Dead devotees are indeed disappointed that plans to give Rick Grimes a theatrical movie showcase have been canceled, it is probably for the best that as of Comic-Con 2022 the planned trilogy of movies starring Andrew Lincoln’s Rick have been transformed into a TV spinoff. Translating a popular TV show to the big screen is often hard, as audiences prove resistant to pay for something they have always gotten for free – or, in the case of The Walking Dead, as part of their cable TV package. For now, Rick and Michonne’s spinoff is set to consist of six episodes, although the door is likely open for more if Lincoln and Danai Gurira want to keep coming back. For now, the actual story here is under wraps, but a 2023 premiere is expected.

Why can Vecna open portals now? 1. The detail of the...