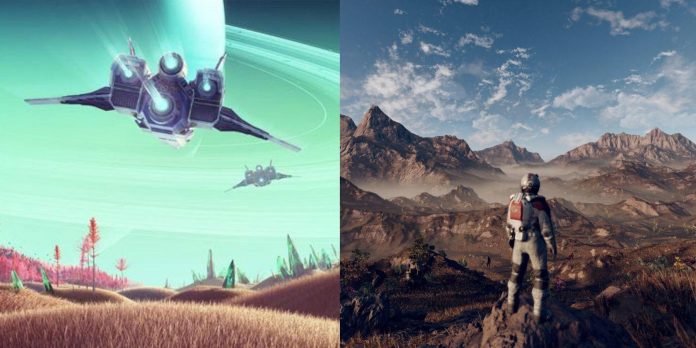 No Man’s Sky is an unsurpassed space exploration and survival game that gives players the opportunity to travel the galaxy, explore unique planets and uncover the secrets of the game. Fans hope that Starfield adopts the space RPG style, and the worlds in the upcoming Bethesda game will be as diverse and exciting as in No Man’s Sky. Starfield should pay attention to how No Man’s Sky has developed its planets and exploration opportunities to give players more freedom when visiting new worlds.

After the unsuccessful release, No Man’s Sky has turned into one of the best games in its genre, and largely due to the fact that each planet has something different to offer. Planets, from resources to wildlife, will undoubtedly become the main places in Starfield where players can truly explore and build. Although spaceflight is also an important component of the game, Starfield planets cannot lag behind, otherwise the game will be limited to only a few planets, as players will not want to explore every available world.

Variety of planets in Starfield

Although No Man’s Sky includes an almost infinite number of planets, the only thing that made the study so attractive was the differences between the planets. From animals and plants that can be scanned to materials unique to certain types of planets, the diversity of the world means that players are encouraged to continue searching for unique and rare materials. There are not as many planets in Starfield as in No Man’s Sky, and this gives him the opportunity to take another step forward in this diversity.

Starfield should encourage players to travel to new planets with lots of exciting content. Although the number of Starfield planets is limited, there will still be about a thousand to explore, which will probably keep players busy if they have enough variety to make it worth it. Since there are probably about ten planets in each Solar System, there is a chance that some of them may not be amenable to research at all, for example, gas giants or planets located too close to a star. If so, the planets that players can explore should be even more diverse than the worlds of No Man’s Sky, thanks to the reduced number.

Planets should have different uses

No Man’s Sky features types of planets, each filled with unique resources, wildlife and activities, but also planets grouped according to their number. Some planets are filled with living beings, rich in resources and may even contain alien life or outposts. This makes certain planets more useful for certain activities; for example, when mining carbon, players will probably have to kill plants and animals, which will cause the Guardians to become hostile. Instead, players can go to planets where there is no Intelligent life and dig without worrying about the Guardians.

Starfield should include something similar, offering players planets rich in natural resources and uninhabited for mining expeditions, and other planets packed with loot and enemies. The inclusion of planet categorization in No Man’s Sky will allow players to understand the systems they visit and gain insight into the knowledge. This will make exploration much more important and may give players the opportunity to discover rare planets filled with the best resources and loot.

No Man’s Sky’s open style of play encouraged exploration and rewarded players by giving them key information about existing settlements or even the ruins of lost settlements; however, there are no major settlements of Starfield civilizations. This allows players to have larger ruins, somewhat similar to dungeons that they can explore, and gives them the opportunity to focus on the knowledge of this civilization and the elements of the role-playing game.

Big cities and ruins in Starfield will give players an unprecedented experience and provide most of the variety of locations in the game. No Man’s Sky provides players with many ways to explore the planet in the form of vehicles, and Starfield should do the same. Exploring the planet from the air should allow players to map the planet and discover larger objects such as mountains, forests or ideal locations for a base, and driving or even scuba diving can allow players to discover caves and mines, giving the exploration a sense of realism.

Fans of No Man’s Sky gradually fell in love with the space survival game, which boasted absolute freedom, allowing players to do whatever they want and often adding new content. Although Starfield most likely won’t follow the same strategy, it already aims to give players more freedom in the game, but it needs to be done. A variety of actions, unique planets to explore and special actions can help Starfield players gain this degree of freedom.

Starfield is scheduled to be released in 2023 for PC and Xbox Series X|S.