Home Tech What should be considered when buying a hard drive (HDD)? 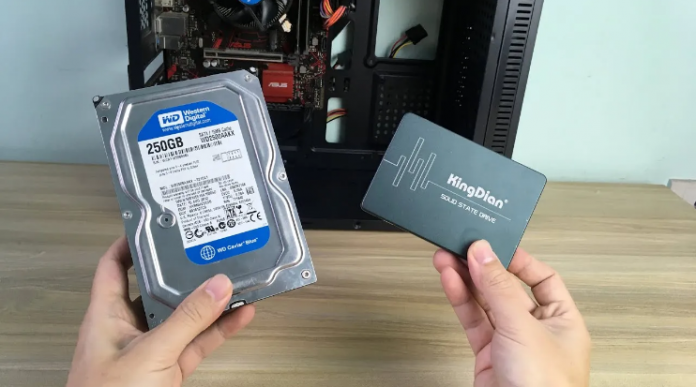 What should be considered when buying a hard drive or HDD, as it is called? What are the differences from SSD? Here are the details…

If you are assembling a computer case, if your existing hardware is faulty, or if you want to increase the storage capacity of the desktop or laptop computer you are using, you will be faced with two different storage options, such as a hard drive and a solid-state drive. In this article, we answer in detail the question of what should be considered when buying a HDD, that is, a hard drive, and what are its advantages over an SSD.

What should be considered when buying HDD (hard drive)?

Before answering the question, what should be considered when buying a hard drive for our computer, let’s talk about the differences from SSD. Hard drives, which still remain one of the most popular storage solutions, are a data storage tool that contains many mechanical parts and disks.

As you can see in the photos, there are metal disks inside, similar to CDs, and the system writes information here, saves and reads it. We can think of solid-state drives as large-size memory cards that do not contain moving parts, support new technologies, work very fast and collect data in cells.

Since there are no mechanically moving parts inside and the power consumption is much lower, it is physically more durable and has a longer service life. In other words, solid-state drives are leading in almost all areas of binary comparison.

But despite this, today HDDs still sell better than SSDs. The main reason for this is that this technology has been around for many years, and its prices are at a very affordable level. For example, a 1 TB SSD costs at least 2-3 times more than a HDD of the same volume.

Of course, here the price difference can be up to 10 times depending on the type and speed of the SSD. This is why many people choose hard drives for cost reasons when assembling an affordable system or a large-volume storage system. In fact, most computer users prefer to buy a hard drive as an additional storage next to a solid-state drive, on which they can install Windows to speed up the operating system. So what should be considered when buying a HDD, that is, a hard drive?

4 golden rules that should not be taken into account when buying a HDD!

After that, we can answer the question of what to consider when buying a hard drive. The first HDDs had 2 different connection formats, IDE and SATA. But all new technologies today support SATA. Therefore, the product you will receive should be like this.

As we mentioned in the title, there are 4 golden rules. The first of these is the read and write speed of the device. The reading speed shows how fast it can open the file loaded into it at the moment. For example, games downloaded to a hard drive with a high read speed will open much faster than their less expensive competitors.

On the other hand, the write speed indicates how fast this device can save files when transferring files from another source. For example, when you want to download a 2 GB movie to your computer via USB, a system with a high recording speed will cope with this faster.

While the write speed of hard drives reaches the highest level of 150 MB/s compared to SATA I, we can see a speed of 600 MB/s for SATA III solid-state drives. M2 solid-state drives, similar in shape to RAM, can currently reach speeds of up to 7000 MB/s. In fact, SSD models with PCIe 5.0 support, which will be available until the end of 2022, will be able to reach speeds of up to 15,000 MB/s.

But as we mentioned earlier, hard drives are much cheaper than their competitors, even if they are slow. In addition, although on paper the difference is 100 times, in reality the number of devices approaching this value is very small. However, we still have to prefer the highest speeds we can get when choosing a hard drive. There will be a slight difference in price.

The second golden rule is the speed of rotation. This data represents the number of revolutions of a mechanical hard disk drive per minute, in short, its speed. There are usually 3 different options on the market in the form of 5400, 5900 and 7200 rpm.

Here again we have to choose the fastest one, since there are very small differences between them. It cannot be said that HDD will be much better because of its high speed. But before starting the reading process, it will discover the information it was looking for earlier. That’s why you need to pay attention.

The third golden rule to consider when buying a hard drive is the amount of cache memory. When the memory of the devices increases, you will see that the front memory will also increase. For example, we usually see 64 MB of cache memory on 1 TB hard drives. But when we want to buy 8 TB, this amount can increase to 256 MB.

These caches analyze the work we are doing and predict our next move. We can even think of this interface as RAM for hard drives. For this reason, when we look at devices with the same amount of memory that we are going to buy, it would be more logical to choose a device with a large amount of cache memory.

Compatible with the motherboard

If the fourth gold dries up, it will be motherboard compatibility. All SATA ports are compatible with each other. For this reason, you can remove the hard drive from your computer and replace it with a new or faster solid-state drive. However, if your motherboard supports SATA I, you can only get a speed equal to a hard drive by installing a SATA III solid-state drive. Therefore, before buying a device, you need to know the limitations of your system.

Note. If you are going to buy a hard drive for your laptop, you can choose 2.5-inch hard drives instead of 3.5-inch ones in cases where there is not enough physical space on your computer.

In this article, we answered the question of what to consider when buying a hard drive for you. What do you think about this subject? Don’t forget to share your opinion with us in the comments!

A Tesla Driver Survived The Accident With Its Fast Maneuver As...