Home Celebrity “What Meghan wants, Meghan gets!” – When Prince Harry was “firmly put... 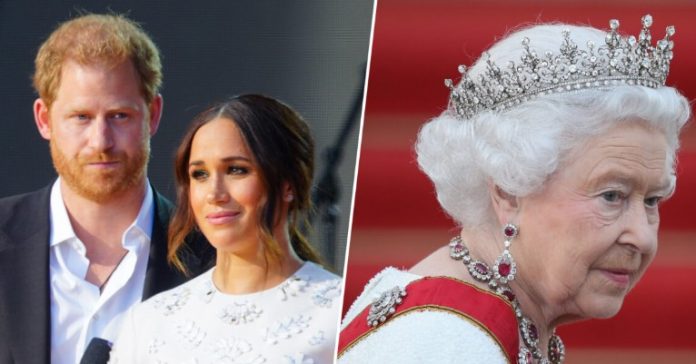 It is believed that Prince Harry and Meghan Markle‘s relationship with the royal family has worsened due to their separation in 2020. The House of Windsor was unhappy when they resigned as working members of the royal family and moved to California. Meanwhile, their explosive interview with Oprah Winfrey and allegations of mistreatment have added fuel to the fire.
However, after the death of Queen Elizabeth II, various incidents surfaced, indicating that everything was not all right in the royal family and Meghan Markle from the very beginning. Royal correspondent Valentine Lowe told an anecdote from the royal wedding of Prince Harry and Meghan, which infuriated the Queen and upset her grandson’s actions.

Prince Harry upset his grandmother because of Meghan

In his book Courtiers: The Hidden Power of the Crown, Valentine revealed that the Queen’s costumer Angela Kelly once enraged Prince Harry. Shortly before the royal wedding, the matriarch announced that she would lend one of her tiaras to Meghan for her big day. Her Majesty made the same offer to Prince William’s wife Kate Middleton at her wedding.
Following the order of the monarch, Harry and Meghan arranged a meeting with Angela and chose a diamond tiara-the bandeau of Queen Mary. However, the problem arose when the former actress wanted to hold a dress rehearsal with the stylist Serge Norman. During the rehearsal for the big day, Angela was not available, and therefore the Duchess of Sussex could not access the tiara.

All this fiasco infuriated Prince Harry, because he believed that Angela was unavailable intentionally, and the Sussex royal accused the dresser of being in the way. In a dispute with Angela, Harry also stated, as quoted by the Times: “What Meghan wants, Meghan gets!”
The prince’s rude behavior did not go unnoticed by Her Majesty, and she summoned Harry to a meeting. According to Valentine, the Duke of Sussex was “firmly put in his place” by his grandmother for his “frankly rude” behavior. The incident was definitely a shock, given that Harry was the late monarch’s favorite grandson.

Do you think Harry’s behavior with Angela was justified? Share your thoughts in the comments.

BILLIE EILISH FACES HER ME FROM THE PAST

Could Tesla CEO Elon Musk be the world’s first trillionaire?