Home Entertainment What kind of Marvel comics supervillain would you be based on your... 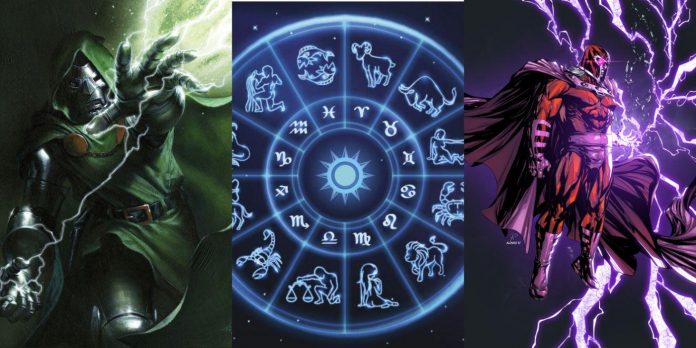 The recent and bigger-than-ever San Diego Comic-Con 2022 witnessed Marvel Comics fans from around the world tuning in to get a sneak peek into all the projects on the horizon featuring their favorite Marvel characters.

With Doctor Strange: The Multiverse of Madness, Thor: Love and Thunder, and Guardians of the Galaxy Vol 3 beginning to shed light on the more cosmos-spanning aspects of the Marvel universe, it provides the ideal opportunity for the astrological examination between the notable Super-Villains of Marvel Comics and their guides from the stars.

The foremost of the zodiac signs, the ambitious Aries finds its avatar in the traditional Spider-Man foe, Venom. Always seeking to improve his station, Eddie Brock becomes Venom, giving in to his natural rivalry with Spidey and yearning for recognition. From there, Venom will engage the Wall-Crawler with what can only be called an Ovis-like determination.

Unfortunately, such passion and independence can quickly become an aggressive stubbornness, making dealings with Aries complex if not on their terms. Sadly, this often results in the butting of heads, figuratively and literally, a concept Venom knows all too well.

Over millennia, the Darwinian-minded bull En Sabah Nur patiently and practically labors towards his true goal, the mutant’s evolution as the galaxy’s dominant force. Over time, Apocalypse will lock horns with the likes of the supernatural Dracula and the X-Men, ushering his plans to fruition.

This single-minded pursuit and hatred of complications, rudimentary in Taurus, will see Apocalypse hibernating for centuries, awakening throughout history, to assure the smooth operation of his carefully laid plans. Finally, his uncompromising attitude towards weakness stamps Apocalypse as the Brahma of Marvel Super Villains.

Castor and Pollux Troy, the Twins of the zodiac, bestow qualities of adaptability, intelligence, and a silver tongue to those who fall under their sway. Finally, look no further than one of Thor’s most evil comic super-villains and brother made widely famous by the MCU, Loki, the Asgardian Jotunn whose very existence illustrates duality.

Loki is the Norse deity of Mischief, an eternal foe of routine and repetition, often thriving in chaos, a cosmic necessity. But, unfortunately, the same boons of versatility and intelligence can bring about the downfall of the Gemini, sometimes trying to do too much, resulting in inconsistency, something Lauffeyson has struggled with from time to time.

Born into the horrors of World War II and the Nazi occupation, Magneto will vow to end the ideological wars that ripped his parents and his family from him, pursuing it with a tenacity born from the stars. Those same energies will see Magneto found the Brotherhood of Evil Mutants and the island nations of Genosha and Krakoa to give mutants a permanent home, showing his crustacean-guided loyalties.

Conversely, friends and foes have repeatedly used his loyalty against him, birthing his endless suspicion of others. Combined with having witnessed and committed an untold number of atrocities, Magneto can become subservient to his internal pessimistic energies, proving even the Master of Magnetism should be wary of the Yin aspects of Cancer.

Scion of the mighty zodiac Leo, Thanos of Titan, is a natural-born commander whose powerful charisma motivates allies and terrifies enemies. Over time, Thanos will direct some of the fiercest warriors in the galaxy, like Infinity Watch and the Black Order, proving himself the alpha of Marvel comics’ super villains’ ‘pride.’

RELATED: The 10 Best Thanos Comic Book Storylines, According To Ranker

Thanos shows even the Lion isn’t infallible through his aversion to the ideas, goals, strategies, etc., of others, even when they could further his desires. Nevertheless, it would be wise for the Mad Titan to heed the sage proverb, “Pride comes before the Fall,” lest his Leonic machinations devour him.

Pulling from the Virgo’s supreme influences, Der Rote Schädel founds the terrorist organization Hydra, tactically guiding it towards global domination. Also, possessing some of the fiercest devotion in Marvel, albeit to himself, Red Skull will clash with the Avengers, X-Men, and many villains due to his zealous conviction to spread oppression and hate across the globe.

Eventually, Red Skull takes many of Virgo’s strengths and warps them with his charred, black soul. Red Skull’s expectation of others sharing in his tyrannical visions of a militaristic world order results in him becoming violently critical of any that would oppose him. Ultimately, boons like devotion and a high analytical IQ become deformed when corrupted by his malice and evil.

Doctor Otto Octavius, a distinguished scientist with PhDs in nuclear physics and biochemistry, finds innate synergy within the astrological bearer of the scales, Libra. Both before and after the tragic accident that fused his mechanical arms to him and destabilized his psyche, Doc Ock earned the respect of allies and enemies alike with his fair-minded methods, even showing diplomacy while leading the Sinister Six.

Considering all variables inevitably leads to a conundrum for scale bearer Ock, especially when he swaps his conscious with his arch enemy Spider-Man. Yet, this inevitably leads to Ock falling victim to the traditional Libra pitfalls of uncertainty and evolving self-pity, leaving him to seek the balance that his zodiac demands.

As the eighth sign of the Zodiac, Scorpio fuses resourcefulness with independence and a secretive disposition in the Dread One, Dormammu. Created seeking the forbidden, Dormammu, craving the signature markers of Scorpio in power and autonomy, will conspire with his sister, Umar, to commit patricide.

Sadly, Scorpio’s secretive nature and unyielding pursuit of power lead many to distrust Dormammu’s motivations, and with good reason. The ruler of the Dark Dimension often depicts the predatory scorpion’s prototypical manipulative and violent trappings, coming into conflict with Doctor Strange, Clea, and the Avengers.

Exhibiting the telltale Sagi characteristics, Doctor Doom is a strong-willed trailblazer that prefers assertive engagement with the outside world. Forever ruling as the Latverian monarch, Doom profiles as a decisive regent, always seeking a means to prove his grandeur and capabilities to all through any means necessary.

RELATED: The 10 Most Underused Villains In Superhero Movies, According To Ranker

Such a relentless drive to push the bar forward leads Doom towards becoming disenchanted with a “normal” existence, a noted Sagittarius drawback. Finally, while an immutable will and assertiveness are valuable traits, such potent energies can come off as challenging or threatening from an empowered archer like Doom, illustrating why Orion usually works best alone.

Consistent and meticulous, Capricorn identifies the keys to success and sets about them with an ardor few can match. The crucial cosmic entity Galactus shows the same drive in his never-ending pursuit of planets to feed his unending hunger. Embodying Capricorn loyalty, Galactus will leave the Power Cosmic with multiple heralds after they have left his service, even taking some heralds back after they had defected.

In doing so, the Devourer of Worlds shows his ability to recognize value, a known Capricorn trait. Such loyalty does come at a cost, though, for when the same heralds fail to meet Galactus’s Capra high expectations, they will find his unforgiving wrath long-lived indeed.

Among the super-villains of Marvel, there is nary a more forward-thinking, endgame-focused, Aquarian antagonist than Kang the Conqueror. An individual first that enjoys exchanges with similar intellects, Kang bears his waters of conquest throughout the Marvel multiverse, subjugating entire universes.

Indeed, the zodiac water bearer is least known for risk aversion, hastily leaping into the unknown, knowing it serves the grander scheme. Amalgamated with contempt for the drab and mundane, Kang envisions the perfect antidote, the conquest of all universes within the allotted timelines.

As the last sign of the zodiac, Pisces endows its children with a penchant for invention and an abundance of energy to focus on acquiring knowledge and wisdom. Norman Osborne will utilize his endowments to found Oscorp, an R & D firm focused on biochemicals and robotics. Here, Osborne will throw himself into his research, eventually experimenting on himself, becoming Green Goblin.

Like many Pisces, Green Goblin must always caution against believing himself “too nuanced,” or he risks further alienating himself. Also, Goblin displays the piscatory inclination toward spending too much time trapped within the confines of his mind, spurring the maniacal madness of the Goblin Lord.

One Piece: A Story for the sake of Bink