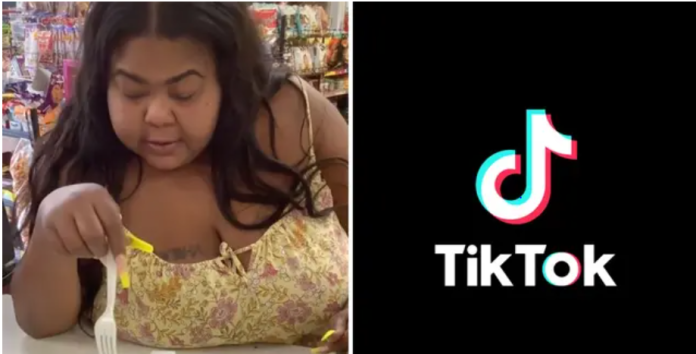 TikTokers are obsessed with the sound of “It’s chicken Salad,” which went viral thanks to a woman approving a Cleveland deli.

The video, posted in a short app on August 28, became popular in mid-October after a Cleveland woman accidentally advertised her local deli.

In a video posted by 81stdeli, Tanisha Godfrey tasted chicken salad in front of her and said, “Better come here and take this.”

Then someone off-screen asked her what it was, and she answered: “It’s a chicken salad,” and continued to share where she got it from (East 81st Deli) and what ingredients were in it.

The 15-second clip has gained more than 22 million views and has now become a viral “sound” in the social media app.

It has already been used in more than 131,000 TikToks, as content creators and celebrities have made their own funny versions of videos using the “It’s a chicken” sound.

Lizzo posted a video of herself lip-syncing with Tanisha’s voice while eating fried chicken waffles.

Tanisha has published several duets with celebrities who have used this sound, as well as several remixes of the original sound.

She told TODAY Food that the clip documented her first time trying a salad at a deli. “So I stopped at the store as usual,” she said. “And I’m like, ‘Hey, guys, you’re making salad now, right? Can I have a chicken salad?” and I gave him extra things to put them in.

“And when it was ready, it was a lovely salad. So he said, “Hey, let’s do TikTok.” That’s how it all started.”

Wael Herbawi, owner of East 81st Deli, told News 5 Cleveland that since the video went viral, he has gained a lot of fans, as well as customers from “Chicago, Atlanta, California, Las Vegas, New York, from all over Ohio.”

“They say my voice is soothing, like, ‘Oh my gosh, I love you,’ ‘I can’t stop watching this video,'” he said. “People make songs out of this video. It’s a lot of fun.”

Wael also revealed in an interview with Bon Appetit that he now earns three times more money than usual, as TikTokers travel from different states to get his now famous chicken salad.