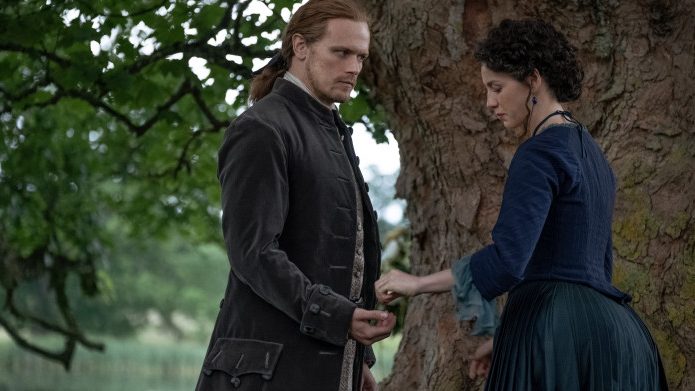 Outlander’s Claire steadfastly refused to take off Frank’s gold wedding band after traveling back in time but why? It didn’t even seem like a question when Jamie married Claire and put his own ring on her other hand.

When Claire returned through the stones to the 20th century in Outlander, Frank did not question the two rings. Perhaps this could have been because she was wearing her band on her ring finger and he may not have questioned it as it was on the “right hand”.

Outlander executive producer Toni Graphia talked about the rings and why Claire kept them both despite living in two different eras. Graphia said the interesting thing is that she always wore Frank’s wedding ring. She never took it off, not even with Jamie.

She went on to say that both men are very strong men to be able to say: I know you love someone else and you have a piece of them in your hand. It’s a testament to Claire in Outlander and how deep her feelings are that she says.

Graphia’s words are interesting as they show that Claire always loved Frank despite falling in love with Jamie. The third season of Outlander also saw brief flashes between Claire and Frank, where it seemed their affection for each other remained.

There were even times when she initiated sex with Frank, but it was unclear if it was out of her own need or if she felt a duty to uphold the Outlander marriage for the sake of her son.