Bitcoin (BTC) and all other cryptocurrencies on the Top 10 list have continued to grow since the beginning of the week. However, while Bitcoin (BTC) exploded above $ 10,000, altcoins did not show any major signs of growth.

The domination rate for Bitcoin (BTC) returned after it was rocketed towards the $ 10,000 mark. The current index is at 60.4%.

Bitcoin (BTC) has been on the rise since the beginning of the week; however, BTC has grown sharply, reaching almost $ 10,300 today. On the other hand, the increase in the last 7 days reached 8.28%. 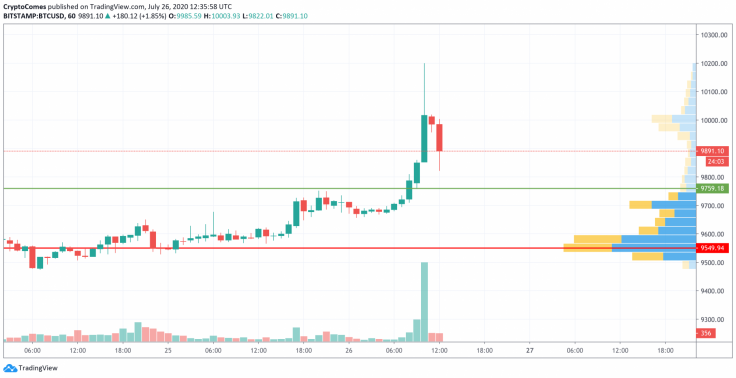 Bitcoin (BTC) entered a correction phase on the hourly chart. Bitcoin’s trading volume and liquidity are at their lowest, which means that the decline may not have been completed yet. The nearest level buyers can resist is the $ 9,750 level. If the bears go below the mark mentioned above, the ascension scenario is canceled.

Looking at the 4H chart, the situation is similar as the bears were seized in the venture because Bitcoin (BTC) could not climb above the $ 10,000 mark. In this candle, there was a sharp increase in trading volume, usually occurring in the last wave of an uptrend. Currently, the bulls need to continue growing between $ 9,650-9,700, which could be the end of the correction. This possibility is valid for the next few days.

Researcher says Covid-19 will not be eradicated completely

Watch the trailer for the third season of Star Trek: Discovery