Home Entertainment What is each Monty Python member doing now 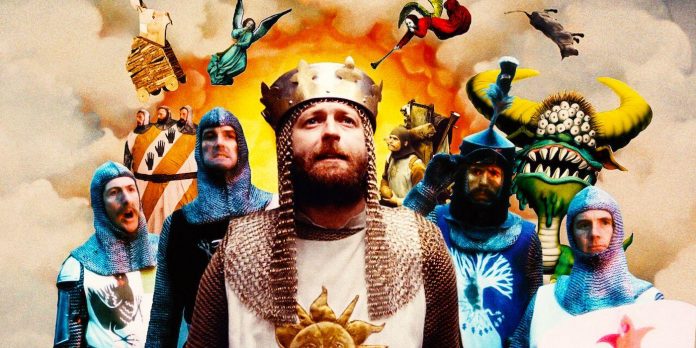 The comedy troupe Monty Python hasn’t performed together for several years, so what are the remaining members of Monty Python doing now? Monty Python first rose to fame when they created the TV show Monty Python’s Flying Circus, which consisted of a number of surrealist comedy sketches. As their popularity and influence grew throughout the 1970s, the Pythons extended into movies, making the cult classics Monty Python and the Holy Grail and Monty Python’s The Life of Brian — among others. Outside film and television, Monty Python also released several albums, performed on stage, released books, and even got their own video games.

Related: Is Monty Python And The Holy Grail The Funniest Movie Ever?

Jones was the second member of the group to die after Graham Chapman’s passing in 1989 after tonsil cancer spread to his spine. Chapman was a vocal supporter of gay rights and played the main roles in both Monty Python and The Holy Grail and The Life of Brian. Monty Python continued to perform on stage after the passing of Chapman, however, since Jones’ passing they have not performed together – last doing so in 2014. Here’s what the other members of Monty Python have done since then, and what they’re doing now.

During his time in Monty Python, Michael Palin played iconic characters like Sir Galahad the Pure, and during the writing of much of their work, he formed a strong writing bond with Terry Jones. Palin reportedly spent a lot of time with Jones during his last years, and their bond seemed incredibly secure throughout their lives. Palin spoke about how there was a divide between himself and Jones and between John Cleese and Eric Idle. In Palin’s view, the latter pair were more concerned with their stardom, with their more lavish lifestyles often leading to conflict within the group.

Away from Monty Python, Palin has continued to write and act. He has several novels and children’s books published and has appeared in a slew of movies, such as several of Terry Gilliam’s movies. His most recent appearance in a film was 2017’s The Death of Stalin where he played the real-life Russian politician Vyacheslav Molotov, alongside Steve Buscemi and Jason Isaacs. Since his final movie appearance, Palin has appeared on some British television. Most recently he portrayed The Green Man in Worzel Gummidge, a fantasy mini-series based written and directed by Pirates of the Caribbean’s Mackenzie Crook. Undoubtedly, Palin has concentrated his efforts on travel documentaries, such as Michael Palin in North Korea. While Palin’s time on travel documentaries appears to be at an end now after he had open-heart surgery in 2019, he received a knighthood in 2019’s New Years Honors List for his services to travel, culture, and geography.

John Cleese is probably the most recognizable member of Monty Python thanks to his illustrious film career that has seen him star as Nearly Headless Nick in the Harry Potter franchise and Q in the James Bond movie, Die Another Day. Cleese’s career in the film and television industries remains far from over as he is cast in Roman Polanski’s black comedy The Palace. The Palace may be a welcome opportunity to see Cleese flex the same comic muscles that saw him become so beloved in Monty Python’s various efforts.

Cleese’s larger fame also comes with his larger tendency to be involved in controversy. While Palin disclosed that Cleese and Idle were the pair in Monty Python that shared similar lifestyles, they have since clashed on financial matters. All the members of Monty Python received royalties from Eric Idle’s musical Spamalot, which Idle brandished as “lovingly ripped off” from the Python’s King Arthur spoof The Holy Grail. Cleese received the greatest royalties, however, since Cleese’s voiceover for God was used in Spamalot. Idle re-recorded the voiceover to cut Cleese’s additional royalties, and the two traded online insults in the aftermath. Cleese has since proclaimed that any conflicts between the Pythons are drastically overblown by certain media outlets.

While Cleese is best known for his work in front of the camera, Terry Gilliam is now famous for his work behind it. During his time in Monty Python, Gilliam played numerous roles in sketches and movies, such as Patsy in Monty Python and the Holy Grail — however, that film was also Gilliam’s first directorial effort. Terry Gilliam has had a successful directing career apart from Monty Python, with 1995’s 12 Monkeys and 1998’s Fear And Loathing In Las Vegas being two of the hit movies in his repertoire. Gilliam has always retained the same surrealist edge that made Monty Python so unique, and he has collaborated with his fellow Pythons on many of his movies.

Gilliam continues to direct to this day and has spoken openly about his next potential projects. In 2015, Gilliam disclosed (via Guardian) that he was working on a “TV series about Time Bandits,” and another series called The Defective Detective, that Gilliam has been working on ever since he made Fisher King in 1991 with Robin Williams and Jeff Bridges. More recently in 2018, Gilliam announced at Brussels International Film Festival that he was working on a movie called Mr. Vertigo, an adaptation of Paul Auster’s novel, with Ralph Fiennes attached to star.

Eric Idle will forever be known for singing “Always Look On The Bright Side Of Life” and his role as the brilliantly named Sir Robin the Not-So-Brave-As-Sir-Lancelot, among a whole host of memorable characters in the Python’s other work. One could argue that Idle seems to be the Python that remains the most attached to their body of work, as he has created Spamalot, a musical version of the Holy Grail that he has produced with the blessing of the other members of Monty Python. In 2020, it was announced that Idle would adapt his Spamalot script into a feature film for Paramount Pictures. Idle has continued to do other work too. He’s lent his voice to a handful of pictures in the 21st century, most noticeably as Merlin in Shrek the Third, but he has appeared much less in live-action film and television, with his last television appearance in 2016. His work on Spamalot indicates his passion for live performance, especially considering he also directed Monty Python Live (Mostly) when he was not involved in directing any of their movies.