Home Crypto What is ConstitutionDAO Coin? 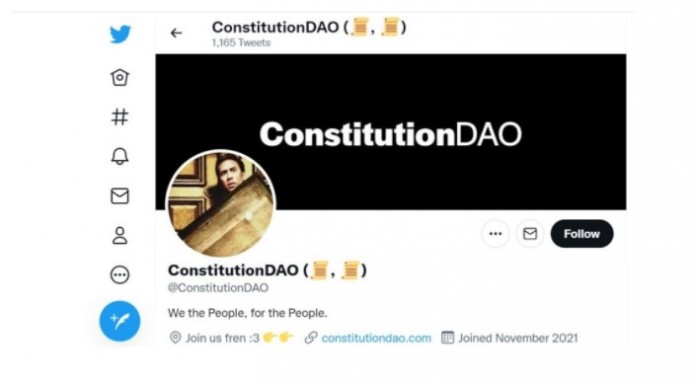 ConstitutionDAO is a decentralized autonomous organization (DAO) established in November 2021 to receive an original copy of the United States Constitution.

What is ConstitutionDAO (PEOPLE)?

The group raised $47 million in Ethereum but lost a $43.2 million bid at Sotheby’s auction. ConstitutionDAO organizers believed that had they placed a higher bid, they would have had insufficient funding to protect, insure, and transport the artifact. Organizers say they will refund contributions and Ethereum fees

Bloomberg News wrote that the team’s efforts demonstrate the power of the DAO, having the potential to change the way people buy things, start companies, share resources, and run nonprofits.

More specifically, ConstitutionDAO was founded on November 11, when a group of crypto enthusiasts got together on Zoom with the common goal of raising funds to secure the purchase of a rare copy of the US constitution, which will be sold at Sotheby’s auction on November 19.

In anticipation of the auction, the DAO has raised more than $45 million in ETH from over 17,000 donors, but in the long run, the constitutional copy has not been secured after losing to anti-crypto Citadel CEO Ken Griffin during the auction.

Despite having enough resources to secure the constitution, the DAO was unable to do so, according to several analysts’ estimates. Because they would pay almost a million dollars in contributions, transaction fees and even more.

A few days after losing in the auction, the DAO announced that it was shutting down the platform, saying that all donors will be able to claim Ethereum refunds in exchange for the PEOPLE tokens they receive when they contribute. According to Coinmarketcap data, PEOPLE was worth around $0.004 at the time of closing.

In addition, the PEOPLE token now represents a historically significant DAO move, as the bid for the document failed.

Although some names were distant from ConstitutionDAO due to the failure of the project, PEOPLE token became popular again with the listing of Binance.

In addition, there are currently 5.05 billion PEOPLEs in circulation and the maximum supply of PEOPLE Coin is stated to be 6,790,819,656 PEOPLE.

How to Get ConstitutionDAO Coin?

PEOPLE Coin can be purchased quickly and securely through Binance, the world’s largest cryptocurrency trading platform in terms of trading volume.

To buy PEOPLE Coin, you first need to be a member of Binance and then send fiat money. After sending a fiat currency such as Turkish Lira or dollars, purchases can be made in Binance Coin (BNB), BUSD, Tether (USDT) and Bitcoin (BTC) PEOPLE trading pair, where PEOPLE Coin is traded.

Good News for SHIB and These 11 Altcoin Investors: Famous Company...

Goldman Warns: Gold and Bitcoin Investors Should Prepare for May!