Home Crypto What is a Shiba Inu coin? SHIB coin future and review 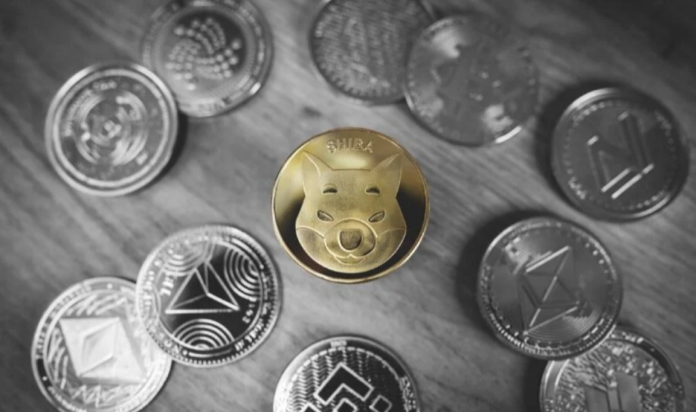 With the recent price increase, what is the Shiba Inu coin, which is on the agenda of the crypto ecosystem? Shiba Inu is a decentralized “meme” token project and its token bears the name SHIB. Unlike Dogecoin, the wide range of uses of SHIB attracts serious attention. Because the usage area of ​​cryptocurrencies developed based on internet memes is quite limited. On the other hand, having decentralized finance and NFT technologies distinguishes SHIB from other meme tokens. In our guide, we will tell you what you need to know about the SHIB token and the details of the project.

The Shiba Inu project was developed in August 2020 as a competitor to Dogecoin. According to the project’s website, the founder of Shiba Inu has the nickname Ryoshi. We can say that our information about Ryoshi is limited. However, besides his Twitter page, he also has a Medium page where he posts. Therefore, it is possible for us to draw some inferences about Ryoshi, even if we do not know his true identity.

Ryoshi explains what his nickname means in an article written by him. According to the article, if you meet someone at a designated place and time, you should introduce yourself as Ryoshi. That way, you’ll meet someone special if the person you meet will do the same.

In addition, Ryoshi’s arguments include the lack of importance of persons.

“I’ve been saying it from the beginning: I’m nobody and I’m not important. Even if efforts to reveal my ‘identity’ are successful, the result is not impressive at all. I just press the keys of the keyboard and I can easily switch places. I am Ryoshi.”

According to Ryoshi, the founder of Shiba Inu, the SHIB token can outpace Dogecoin in many ways before it reaches the value of 1 cent. As a matter of fact, the recent increase in SHIB also proves this argument.

The project has developers from all over the world and is advertised by a large group called the “Shib Army“.

How to get SHIB coin?

SHIB token, which is among the top twenty projects in terms of market size, can be purchased from many exchanges. The SHIB token is listed on global cryptocurrency exchanges, especially Binance, Coinbase and OKEx.

The fact that the project created a field of use for the world of decentralized finance enabled decentralized exchanges to develop a positive perspective. Therefore, you can buy SHIB tokens from popular decentralized crypto exchanges, especially Uniswap and Pancakeswap.

The Shiba Inu is an internet prank token inspired by a Japanese dog breed of the same name. It was inspired by the “meme token” stream of the popular cryptocurrency Dogecoin, which emerged in 2013.

In general, cryptocurrencies in the “meme token” category do not have multiple uses such as Bitcoin or Ethereum. However, unlike other meme tokens, Shiba Inu established a decentralized exchange in July of 2021.

One of the remarkable features about the Shiba Inu is its total supply. In 2020, one quadrillion SHIBs were produced during the generation of tokens on the Ethereum network. Half of the total supply is locked in SHIB/ETH liquidity pools on the Uniswap exchange. Liquidity pools provide returns on decentralized exchanges in line with investors’ parities.

Another important feature of the project is the donations it makes as a marketing strategy. The other half of the SHIB token supply was sent to the address of Vitalik Buterin, the creator of Ethereum. The remaining amount of SHIBs, some of which were burned by Buterin, was donated to the India COVID-19 fund.

There is another cryptocurrency called LEASH within the SHIB ecosystem. Produced by the founder of SHIB, the LEASH token is named Doge Killer.

With the decision made by the Shiba Inu community, a campaign was organized to save Shiba Inu dogs. Purchases made through the smile.amazon.com link on the Amazon platform are used as funds by the Shiba Inu Rescue Association. Each a

Donations are made within a certain percentage of the shopping.

ShibaSwap, a decentralized exchange, is a cryptocurrency platform where you can perform peer-to-peer trading. It allows trading of SHIB and other cryptocurrencies without a middleman. In addition, it allows users to provide liquidity and lock their tokens. Cryptocurrencies in the “stake” (locking) transactions on ShibaSwap are kept on digital wallets. Also, two different cryptocurrencies based on SHIB token and ERC-20 can be earned through staking.

The first of the tokens earned as a result of the locking processes on the ShibaSwap decentralized exchange is BONE, and the second is the LEASH token, which we mentioned at the beginning of our article. The total supply of BONE token is 250 million units and is a kind of governance token. BONE users can vote on changes to the Shiba Inu. The LEASH token, also known as an elastic token, has a similar design to stable cryptocurrencies. Thanks to the logarithmic algorithm it contains, its supply can be increased or decreased. Thus, the price moves forward as if it were fixed. Also, the LEASH token performs at 1/1000 of DOGE in price.

For example, if the price of Dogecoin hovers around 5 cents, the circulating LEASH tokens are minted, added to, or destroyed by removal.

The change in supply for the LEASH token allows Shiba Inu holders to store their value.

Shiba Inu, a meme token, has six different features on the decentralized exchange, ShibaSwap. These features aim to increase the functionality of tokens on the ecosystem.

Dig: This feature is a type of liquidity pool feature. Accordingly, users can transfer their crypto assets to already existing liquidity pools. Thus, liquidity providers are rewarded with SSLP tokens.

Bark: Through the feature known as “Woof”, users can get BONE rewards in SSLP tokens.

Embed: With this feature, SHIB tokens can be locked and a high-interest BONE token can be earned in return. High interest rates of up to 200% appear on locked tokens as xSHIB, xLEASH or xBONE. 33% of BONE returns are instantly convertible, while 66% remain locked for six months.

Swap: Swap, which is a kind of stock market feature, allows to switch between different assets.

Bonefolio: This feature is a panel where APY rates and current interest rates can be monitored. Basically, it helps to display data flow and rates.

NFT: Featuring pixelated photos of a Shiba Inu dog, the NFT feature consists of images similar to the popular NFT collection CryptoPunks. NFTs named “Shiboshis” are ranked among themselves according to their rarity level.

Shiba Inu did not attract enough attention from the crypto world in the early days of its launch. However, Elon Musk’s posts on Dogecoin caused an increase in interest in other meme tokens. The world-famous businessman Musk’s serious ownership of Dogecoin made him nicknamed the “Dogefather”. In addition, it even led to Elon Musk being named as the unofficial CEO of Dogecoin.

Musk, who participated in the “Saturday Night Live” television program in May 2021, was expected to make positive statements about Dogecoin. However, unexpectedly, after the television program, there were serious declines in DOGE. SHIB, which started to come to the fore at that time, showed a 2000% increase in five days.

Later, Elon Musk stated that his company Tesla cannot use Bitcoin as a payment method. Therefore, serious declines were seen in the crypto money markets. Of course, the SHIB price was also affected by this overall picture. To summarize briefly, we can say that the famous entrepreneur Elon Musk both indirectly increased and decreased the price of SHIB.

If we look at the technical chart of SHIB, we can see that there has been an increase of up to eight times in the last three weeks. SHIB has risen nearly twice as high as the parabolic rise and resulting peak in May 2021. Therefore, let us remind you again that the cryptocurrencies with parabolic increase should be handled carefully.

Attention should be paid to the previous ATH level of 0.0000393351 and if there is a mass outflow of money from the markets, it should be followed carefully. According to Fibonacci, the 0.0000079 levels can be indicated as resistance. 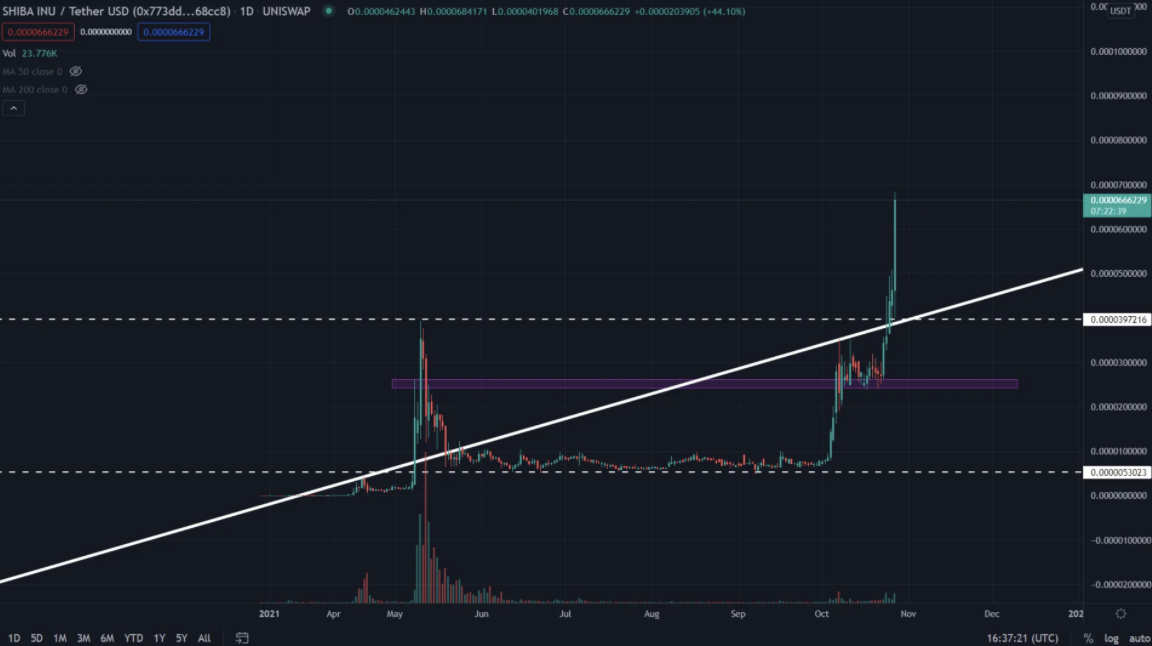 In the crypto money markets, sometimes decentralized finance and sometimes NFT season is experienced. The development of meme token projects, which increased in May of 2021, now causes the meme season to be experienced. Evaluation of the Shiba Inu project and by manyThe fact that n is being talked about also positively affects other meme tokens. However, the high volatility of meme tokens poses a serious disadvantage for investors. Therefore, I think it is useful to do careful research when examining meme token projects.

Chris Larsen may be using XRP despite lawsuit