Home Entertainment What if Batman Pattinson had joined DC EU instead of Keaton? 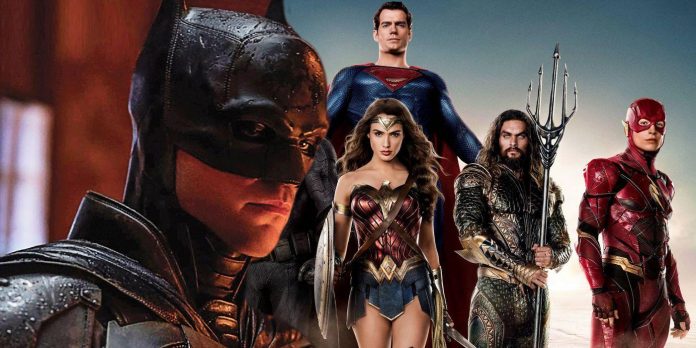 If Robert Pattinson’s Batman joined the DCEU instead of Michael Keaton, the franchise would be forced to go in a very different direction. As a franchise, the DCEU has yet to fully find its feet. Its movies can often be considered divisive at best, and behind-the-scenes issues have plagued its most significant films. It seems that steps are now being taken to remedy the DCEU’s issues, but the fact remains that its start has been turbulent, to say the least.

The DCEU’s official Batman was introduced in the controversial Batman v Superman: Dawn of Justice, played by Ben Affleck. Despite initial backlash to Affleck’s casting and widespread criticism of the much grittier approach to the hero that the DCEU opted to take, his iteration of the character has since come to be considered an interesting if unorthodox spin on the Dark Knight. However, the damage was already done, and after dropping out of his DCEU solo Batman movie, Affleck announced that The Flash will mark his final appearance as the character. He is set to be replaced by none other than Michael Keaton, who will once more don the cape and cowl after over three decades of absence from the role.

Related: What If The DCEU Started With Nolan’s Dark Knight Trilogy

Though Michael Keaton is set to become the DCEU’s Batman, it could have been very different. Ben Affleck’s Batman movie ultimately became The Batman – a story independent from the DCEU that saw Robert Pattinson adopt the mantle of the Caped Crusader. If Pattinson was to step in as the DCEU’s next Batman instead of Michael Keaton, the future of the franchise would look incredibly different. Perhaps most importantly, the DCEU would have to reconcile the more realistic tone of The Batman with the wider franchise, but there are actually a number of other barriers to Pattinson successfully joining the DCEU that would need to be considered.

One of the biggest hurdles that Pattinson’s Batman would need to overcome in the DCEU would also be the first. The Flash’s Multiverse story is the DCEU’s key to bringing a Batman from another movie universe into the franchise, but Pattinson’s Batman would meet with an immediate problem in the form of Ezra Miller’s Flash. Miller’s DCEU hero has so far been one of the franchise’s main sources of levity, and though he shared an entertaining dynamic with Affleck’s Batman, the chemistry between Pattinson’s hero and Miller’s would be minimal.

Put simply, the two characters are fundamentally different. Miller’s Flash is a fast-talking, partially self-aware hero who offsets some of the franchise’s grittiness with inoffensive but irreverent humor. Pattinson’s Batman is very much a stoic, gothic figure who takes his crusade to save Gotham incredibly seriously. The stark contrast between the two characters’ respective tones would mean that Pattinson’s Batman joining the DCEU in The Flash would force two conflicting styles of hero to be reconciled, and that would be an incredibly difficult task. Though The Batman was incredibly well-received, the success of Pattinson’s solo outing wouldn’t transfer well to the DCEU, and it’s a certainty that some of the magic would be lost in translation.

Pattinson’s place in the DCEU would need to extend beyond The Flash. The most natural place for the hero within any DC franchise would be at the forefront of future team-ups, meaning that Pattinson’s Batman joining the Justice League would be absolutely vital if he was to become the DCEU’s Batman. Affleck’s Batman has so far filled the role of founder/leader, and the most natural progression would be for the franchise’s other heroes to assume that Pattinson’s Batman would do the same. Though Robert Pattinson’s Batman is brutal, he lacks the high-tech gadgetry or scientific capabilities that Affleck has previously displayed, meaning that his role within the Justice League would likely lie elsewhere.

Related: What If Ryan Reynolds’ Green Lantern Had Been In The DCEU

Perhaps the defining characteristic of Pattinson’s Batman is his ability as a detective. This would perhaps see his role in the DCEU’s Justice League be in a supporting capacity, using his intelligence and stealth capabilities as opposed to the tech-supported action-heavy approach of his predecessor. How his hero would stack up alongside Cavill’s Superman or Gadot’s Wonder Woman is unclear, but as he comes from such a grounded universe, it would require clever writing to work around the potential issues of the contrasting tones. However, there would still be a clear role for Pattinson in the DCEU’s Justice League, and it would have to highlight the differences between the different versions of the hero.

By bringing Pattinson’s Batman into the franchise, the DCEU would be forced to adjust its narrative course. The future of the DCEU is largely unknown at present – with the Warner Bros. Discovery takeover came hints that there may be drastic changes – but the direction of its story so far lies in large, galaxy-spanning conflicts involving extraterrestrial threats. Pattinson’s Batman would likely struggle to find a place in such stories, however, meaning that where the iconic hero is concerned, the DCEU would have to keep its story closer to home.

Though Ben Affleck’s Batman is decidedly human, he was presented as far less vulnerable than Pattinson’s. This made his role in conflicts with Doomsday and Steppenwolf feel a little more natural, something that Pattinson’s character likely couldn’t recreate. Instead, Pattinson’s Batman would need stories that are more introspective and explore the psyches of the DCEU’s heroes and villains, driving the franchise’s narrative in a much more human direction. Though the tone of The Batman doesn’t much match up with the DCEU, a middle ground could be found to incorporate the hero into the franchise – although this would most likely be done at the expense of the DCEU’s wider sci-fi narrative.

Pattinson Would Be A Poor Replacement For Ben Affleck’s Batman

Ultimately, when compared directly through the lens of the DCEU, Pattinson’s Batman could never fill Affleck’s shoes. The two versions of Batman are vastly different in their characterizations, but Affleck’s was written to be of specific use to the wider franchise. This puts any replacement at an immediate disadvantage, but it’s not the only way that Pattinson would hypothetically struggle to live up to his DCEU predecessor.

Perhaps the most significant way that Pattinson’s Batman would struggle in the DCEU is through his lack of experience. In comparison to Affleck (and Keaton), Pattinson’s version of the character is far less experienced, and that creates the need for him to make mistakes as a form of character growth. However, when placed alongside other DCEU heroes, Batman needs to be as close to superhuman as possible, and Pattinson’s hero simply isn’t that. This would inevitably lead to Pattinson’s Batman falling short in comparison to other heroes (and other versions of Batman) in the DCEU, making his hypothetical induction into the franchise somewhat ill-advised.

Steve-O understands why Bam Marger was permanently excluded from the “Weirdos”,...