Home Entertainment What if Apollo Creed had survived Rocky IV? 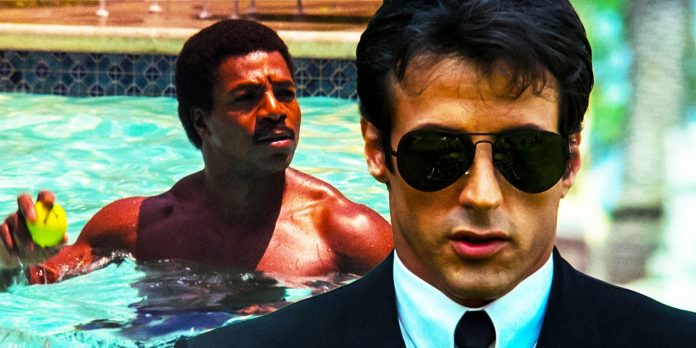 If Apollo Creed had survived his fateful bout with Ivan Drago in Rocky IV, the entire franchise would have been completely different. Carl Weathers’ iconic antagonist from Rocky and Rocky II successfully shifted from villain to hero in Rocky III, where his friendship with the franchise’s titular fighter began in earnest. The pair’s relationship was quickly established as one of the most important in Rocky’s life, with former rival Apollo serving as his best friend and trainer in one of the best on-screen pairings of the sports drama genre.

Carl Weathers made the character far more than just a boxer. Apollo Creed was the Rocky franchise’s best fighter, but he was also its greatest showman, delivering unforgettable spectacles in each of his fights within the franchise. Perhaps the greatest of all was his ring walk in Rocky IV, which he made dressed as Uncle Sam dancing his way to the ring to James Brown’s “Living in America.” However, the ensuing fight marked the short and brutal end to Apollo’s career, with Soviet sensation Ivan Drago viciously beating Apollo to death in the ring.

Had Apollo survived the pair’s fight, the trajectory of the franchise would have been incredibly different. If the one-sided beatdown hadn’t ended in Apollo’s death, the stories of Rocky Balboa’s last few movies would have changed considerably, and the spin-off Creed franchise could have been incredibly different. As Apollo Creed was a huge inspiration to the boxing world in the Rocky universe, his survival could have allowed him to continue to shape the sport for years after his fateful loss to Ivan Drago had he not died in Rocky IV.

How Apollo Surviving Would Have Changed Rocky IV

One of the biggest plot points in Rocky IV is Apollo Creed’s abrupt and violent death. However, if the fight had played out slightly differently, with Creed simply suffering a humiliating defeat, Rocky IV’s story would have been subtly different. Of course, the general line of its narrative would broadly remain unchanged – Rocky would likely still set off to Russia to avenge his friend’s honor and face potential robot Ivan Drago, but certain details, and the film’s overall subtext, would be changed.

If the exhibition bout had ended with Apollo being brutally beaten and rushed to hospital, one of the biggest changes would actually be to Ivan Drago. Drago would seem far less threatening, as even though he’d still be a clear danger, Apollo’s survival would diminish his characterization as a Soviet weapon. The brute force of Drago’s punches is a large part of what makes him such a dangerous opponent for Rocky, and overcoming the same brutal punishment that killed Apollo is a key part of Rocky IV’s story. Apollo surviving the bout makes Drago seem less dangerous, and would consequently make Rocky’s victory seem less momentous. However, short of taking the bittersweet edge off of Rocky IV’s otherwise happy ending, Apollo’s survival wouldn’t change too much else about the film’s story.

Rocky V’s Story Would Have Been Even More Unnecessary

In the Rocky movies, Apollo Creed’s death is significant not just because it galvanizes Rocky to fight harder against Drago but because it has a long-lasting effect on the champion and his personality in subsequent movies. The way in which Apollo’s death influences Rocky in Rocky IV has a knock-on effect to the events of Rocky V, primarily because of the medical concerns that arose as a result of Rocky’s fight with Drago. Apollo’s survival may not have changed this, but it’s less likely that other aspects of Rocky V would have happened if Apollo had been around.

For starters, Apollo and Rocky would likely have taken up training Tommy Gunn as a joint effort. This could actually fix some of Rocky V’s issues – exploring the different styles of Rocky and Apollo and how their combined attempts could influence a young fighter may well have made for a much more interesting premise. What’s more, Apollo’s business savvy could also have served Rocky (and Tommy Gunn) well, with his knowledge of the business behind the sport informing other aspects of Gunn’s career. Apollo surviving Rocky IV potentially could have drastically changed Rocky V’s story, making the most unpopular movie in the franchise a more interesting examination of the world of boxing (and potentially redeeming it).

Rocky Balboa Would Have Been More Upbeat With Apollo

2006’s Rocky Balboa told the story of a lonely, aging Italian Stallion taking one final fight to prove he still possessed his fighter’s spirit. However, Apollo Creed’s death made Rocky Balboa’s fight hypocritical, meaning that this is something that Apollo’s survival would have remedied. If Apollo had survived Rocky IV, Balboa’s fight with Mason Dixon not only would have made more sense, but Creed could have lent Rocky some valuable advice on the subject of growing old gracefully and understanding when to throw in the towel.

Creed’s survival of his beating from Drago would likely have pitted him against Rocky in Rocky Balboa, as it’s hard to see how he’d appreciate Rocky risking his own life in a similar exhibition. However, this could have been resolved by Apollo coming to understand the importance of closure – taking one final chance against champion Mason “The Line” Dixon was Rocky’s own version of Apollo’s Drago fight, and if Apollo had survived, it would have added a poetic and interesting subplot to Rocky Balboa.

Adonis Creed’s Life Would Have Been Very Different

Apollo Creed’s survival would have changed the life of his illegitimate son, Adonis, in one of two key ways. The first is that Apollo would have played a part in Adonis’ life, teaching him and guiding him, providing him with the stability that he desperately needed as a young man. This would have set him on a more measured path than Creed initially finds him on, and he may have had a far more carefully crafted career boosted by nepotism and the added benefit of Apollo’s years of expertise.

However, the other is that Apollo may never have acknowledged Adonis at all. As he was an illegitimate son, it’s implied that Apollo had little to do with Adonis as a boy, and had he survived Rocky IV, this may not have ever changed. Apollo Creed’s son Adonis growing up with a famous father who refused to acknowledge him would possibly cause young Adonis to refuse to entertain the idea of becoming a boxer as a direct result of his father’s rejection. This particular narrative avenue would negate the Creed franchise entirely, as well as make the character of Apollo Creed feel far less heroic.

Apollo’s Survival Would Allow For A Different Creed Franchise

If Apollo had survived his fight with Drago and lived to train Adonis, the Creed movies could have been a far more complete spin-off. If Apollo was acting as Donnie’s trainer, the Creed movies wouldn’t need Rocky Balboa at all, because his role would be taken by his former rival turned friend. With Apollo training Donnie, the younger Creed would have grown up being trained by a former champion, helping him hone his skills at a younger age and likely boosting his career massively.

This would make the Creed franchise’s stories much more Creed-focused, with the emphasis being on the potentially strained father-son dynamic between Apollo and Adonis. This would have created interesting parallels in Creed 2 with the introduction of Viktor Drago, and also could have explored Apollo’s character in more depth. Ultimately, if Apollo Creed had survived the events of Rocky IV, the entire future of the Rocky franchise – and the Creed spin-offs – would have been transformed.

God of War Points To A Live-Action Series: Amazon Advances In...