Home Entertainment What happened when Jin called Kim?! Why is he smashing the phone 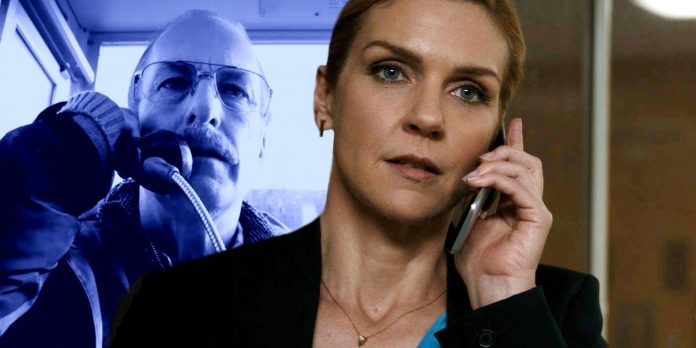 Better Call Saul season 6, episode 11 then catches up with “Gene Takavic” on the date he asked Francesca to call him from New Mexico. After hearing all about the DEA’s movements, Jesse’s car, and the glorious liberation of one Huell Babineaux, Francesca tells Gene about a call she received from Kim. Evidently learning about her ex-husband’s involvement in the Heisenberg case via news reports, Kim wanted to check on Francesca, knowing she was working as Saul Goodman’s assistant. Hearing about Kim’s call (and how she asked if he was okay) inspires Gene to pick up the phone himself…

Related: Why Jeff Was Recast In Better Call Saul Season 6

Perhaps thanks to Mike Ehrmantraut’s investigative nous, Gene already knows that Kim works at Palm Coast Sprinklers in Florida (not as a lawyer, one would assume). He contacts the company through an operator, asks for Kim Wexler, then shares an animated conversation with someone on the other end. Better Call Saul deliberately muffles the dialogue with traffic noise, leaving the audience guessing as to how the exchange actually played out.

Better Call Saul has kept Kim Wexler’s fate hidden for so long, the audience can’t help but feel as nervous as Gene when that phone starts ringing. By quickly pulling back and obscuring the ensuing conversation, Better Call Saul is deliberately tantalizing viewers who desperately want to know how the “Jimmy & Kim” storyline ends. Better Call Saul is already dropping two massive details in season 6, episode 11, confirming Kim is alive and living in Florida. Allowing the audience to hear Gene’s conversation would feel like too much narrative payoff too early, with two whole episodes still remaining. Better Call Saul must surely be saving its Jimmy McGill and Kim Wexler reconciliation for the grand finale, stoking fever-pitch anticipation for the eventual moment they cross paths after six long years estranged.

This delightfully infuriating tactic also keeps Better Call Saul’s biggest mystery alive until the very end. We know Kim is okay. We know she’s selling sprinklers in Florida. But how does Kim feel about Jimmy McGill? More importantly, how does she feel about Saul Goodman after hearing all the awful horrors her ex-husband committed with Heisenberg? By keeping all details of Gene’s conversation under wraps, those questions remain teasingly open-ended… for now.

Did Gene Really Speak To Kim? Why Did He Get So Angry?

There are two possible ways Gene’s phone call plays out in Better Call Saul season 6, episode 11. One: Kim blasts “Saul Goodman” as a murderous criminal who she no longer recognizes, then angrily demands he never call her again. Two: Gene asks for Kim but she refuses to talk, leading to an argument with whichever poor Palm Coast Sprinklers employee picked up the phone. Out of the two options, the latter fits Gene’s tempestuous reaction slightly better.

Kim would certainly feel disgusted by her ex-husband’s actions (enough to check Francesca is okay, even) and probably wouldn’t have many kind words for him. But if Kim really did spit venom over the phone, would Gene respond with anger himself? Given the respect he holds for Kim and the regret he feels about the Heisenberg situation, Gene is hardly in a position to act defensive. If Kim came on the line and yelled at him in disgust, Gene probably would’ve accepted the tongue-lashing and been glad to hear Kim cared, at least.

As such, Gene probably doesn’t speak to Kim in Better Call Saul season 6, episode 11’s phone booth scene. More likely, his request was met with “she doesn’t want to talk to you,” and Gene blew up at the poor messenger, who’d be forgiven for hanging up. Frustration at Kim not even hearing him out is a better explanation for Gene’s rage.

Whether Gene shared a testy conversation with his ex-wife or was met with an impenetrable brick wall, Better Call Saul season 6, episode 11 confirms Kim’s feelings toward him are very much not positive. Kim Wexler and Jimmy McGill parted on bad terms, with Kim coming to believe their relationship was a toxic destructive force that simply shouldn’t exist. Now, Kim knows all about Jimmy’s antics as Saul Goodman, and how his dark streak only grew darker after they split. She might’ve asked Francesca whether Jimmy was still alive, but Kim evidently has precious little interest in building bridges or rekindling old flames in Better Call Saul’s Gene timeline.

If Better Call Saul is to end with a happy reunion, therefore, Gene needs to somehow prove he’s a changed man. Driving down to Florida with a bunch of gas station flowers isn’t enough here – Gene must find a way to make Kim listen, then explain himself in a way that changes her mind. Or maybe he doesn’t…

Better Call Saul season 6’s “Breaking Bad” episode strongly implies Kim is avoiding Gene because she’s upset or angry. Maybe she’s actually trying to resist the temptation of resuming their partnership as scam artist lovers. Kim could’ve become so desperately bored selling sprinklers she yearns for her old life back, and knows one conversation with Jimmy will pull her right back into the game.

Bayonetta 3 will have an additional censorship mode