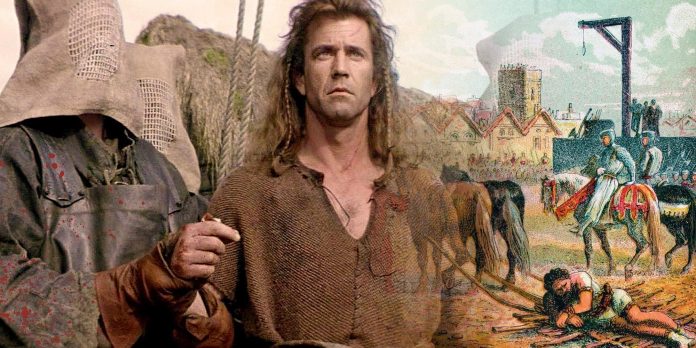 Mel Gibson’s Academy Award-winning film Braveheart focuses on the life and legacy of Sir William Wallace, but omits some details of his ultimate fate. Sir William Wallace was a Scottish knight who fought during the First War of Scottish Independence, which lasted from 1296 to 1328. Although legends about Wallace often contradict reality, there are still historical documents about his deeds during his life, many of which are highlighted in the 15th-century epic poem Blind Harry, which tells about the legacy of the Scottish warrior Wallace.

Wallace served as a source of inspiration for Mel Gibson’s 1995 film Braveheart, which contains many creative deviations from the real life story of Wallace, as well as embodies his true legacy. Braveheart was written by Randall Wallace, who was inspired to write the script after visiting Scotland. Gibson directed the film “Braveheart” and played Wallace, as a result of which the film won five Oscars, including for best film and best Director.

Related: A Northerner’s Trick Means He Beats Both a Gladiator and a Braveheart

At the end of Braveheart, the story of Wallace’s capture, trial and death is told, which is hard to watch, especially after the character has conquered him throughout the film. At the end of Wallace, much is correctly said in the finale, including his statement that he never swore allegiance to King Edward I (played by Columbo actor Patrick McGoohan) and, therefore, could not be a traitor. His execution is depicted mostly accurately, but it omits some key details that make his death much worse than depicted on the screen. In the film, he is taken to the place of execution in front of a crowd, where he is hanged, then disemboweled (off-screen) before being beheaded. Although it’s hard to watch, the longer death he suffered is actually much worse.

In 1305, Wallace was captured and taken to London, where a “show trial” was arranged. He was accused of high treason and sentenced to be hanged, drawn and quartered the next day. Stripped naked and dragged by horses from Westminster Hall to Smuffield, Wallace was beaten with sticks and whips by an angry mob, who also threw garbage and feces at him as he was led to the gallows. There his real pain began, as he was hanged almost to death, then castrated and gutted, and his intestines burned right before his eyes. In Braveheart, this terrible torture is implied, but not visible, as the more terrible historical aspects are omitted, as in Gibson’s Patriot.

The last steps of Wallace’s real death were cutting out his heart and showing it to the crowd before beheading. It would seem that this was enough, but the quartering of his punishment was still ahead. Wallace was cut into four pieces, and each piece was put on display in various places across England, including Berwick, Stirling, Perth and Newcastle, and his head was dipped in tar and impaled on a pike on London Bridge. All this was done in order to demonstrate the power of King Edward I and prevent future Scottish uprisings. However, this would only serve to revive Scotland’s independence efforts, as Robert the Bruce led a rebellion for Scottish independence in 1314, nine years after Wallace was sacrificed.

The Legacy of William Wallace in Other Films

In addition to Braveheart, there are two recent well-known films that also deal with the aftermath of William Wallace’s death. The first is the sequel to the 2019 spin—off “Robert the Bruce,” in which Angus Macfadyen reprises the role of a potential king of Scotland as he recovers from combat injuries following the resumption of the rebellion and reconciles with his future role as king. Scotland. Outlaw King, released by Netflix in 2018, starred Chris Pine as Robert the Bruce, tracing his path to the Scottish crown and rebellion against England immediately after Wallace’s death, and even contains a scene that shows Wallace’s left quarter hanging from a bridge.