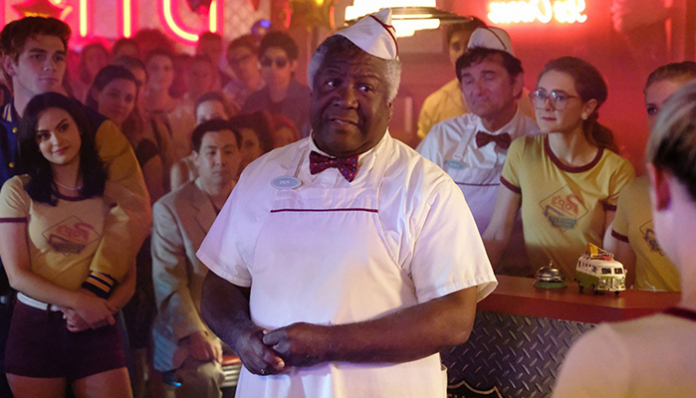 Riverdale rebooted last week when there was a seven-year time jump with Archie Andrews (KJ Apa) alongside his friends and the greatly changed city, many of the characters had seen a change as well.

Among the differences was the change of ownership of Riverdale’s Pop’s Chock’lit Shoppe, which has been in the Pop Tate (Alvin Sanders) family for generations.

The restaurant was owned by Pop Tate (Alvin Sanders), but this all changed after the time jump. Archie moved into town and made his first port of call at the restaurant, only to find a new face behind the counter.

After asking the waitress where Pop was, she told him if she hadn’t found out what had happened to Pop. Concerning fans who feared the elderly worker might have died in the Riverdale timeskip.

Viewers’ fears of Riverdale were allayed after Pop appeared later in the episode. By the looks of it, Pop was stepping down and handing over the reins of the restaurant to his granddaughter Tabitha Tate (Erinn Westbrook).

Archie (KJ Apa) threw a retirement party for Pop (Alvin Sanders) as a restaurant and used it as an excuse to gather his friends together to help him. The final Riverdale scene showed Pop very alive and well even if he was hanging up his apron.

BTS’s Jungkook makes a cute mistake and it has a powerful...