Home News What exactly are these people shouting at each other amid the great... 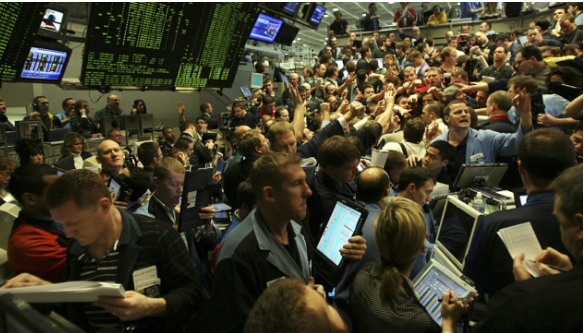 What kind of people are these, whom you could see at least in a movie or video, shouting at each other with a nervous expression and gesticulating in the stock exchange building, what are they really doing? We just explained.

Although we don’t know much about it, there are some images that we often come across. Everywhere you look, one of them is tense shots of a large group of people waving their arms and shouting at each other like crazy in a large square on the first floor of the stock exchange building. This image often appears, especially in films and TV series. Sometimes in the news…

What we know about these people, who seem to be quite tense, are mundane things like money and stock transactions, buying and selling, looking at screens where the numbers turn green and red. It’s another matter if you are better versed in finance, but I’ll explain by imagining that you don’t really understand these things.

First of all, who are these people?

The people you see in this photo, who look a little nervous and excited, are interested in trading options, futures or stocks; it consists of traders and brokers who monitor the markets and work to make the right trades at the right time.

Brokers earn money with a transaction fee by monitoring the market for their clients and executing their transactions, while traders are those who make direct purchase and sale transactions and can make a profit or loss as a result of this transaction.

All together in the “pit”…

These people, taking pictures that make us feel like we are at war, are actually doing their job as usual. I guess this is what you call normality; let me explain.

We can say that these images that we see are actually a kind of special language of communication adopted on the stock exchanges since the XVII century. They control the process by using certain hand signals for steps such as transaction type, price, amount, and supporting this with voice communication, which usually includes shouting. The gathering of a large number of people trying to do all these things in a momentary and correct way creates these images that seem chaotic to us.

In this system, which is known as “Open Outcry” and translates into our language as “open auction”, brokers and traders trade in zones called in English “pits” on the stock market trading floor, create their offers and complete the process.

However, since these trading processes are carried out in real time, and there are hundreds of people around such transactions, as you can imagine, there is competition. This can cause loud noises and tension.

You can compare this to an auction being held by an auction. For example, after a trader declares that he wants to sell certain stocks at a certain price, another trader who says he will buy them at that price declares it, and then these traders complete the process by entering into a contract. This process of declaring what he will sell and what he will take is also expressed in some of the hand signals we mentioned.

This system actually looks like a “dying tradition” now.

Although this is a cult system that has been used for hundreds of years, now there are computers that perform these operations much faster and cheaper than humans. With the digitization of transactions, the number of exchanges and companies that held open trades in these “pits” has decreased over the past few decades.

Today, many of the most important and iconic exchanges are now operating digitally, and this chaotic environment no longer exists. In the 2010s, their number gradually decreased. But there are still places where the system continues. Moreover, there are those who argue that it should continue. It may sound a little crazy, but they have their logical reasons.

They summarize the benefits of this extremely tedious and suffocating system as follows;

It also offers advantages such as audible noise and visible movements in the “pits”, tracking market movements, calculating its volatility.
There are more disadvantages, as you can understand from the evolution of the system into a digital one;

Since there are no restrictions on location in e-commerce, there is access from anywhere.
While in e-commerce transactions are executed with a few mouse clicks in seconds, in open auctions communication efforts are in question between minutes and a large crowd of people.

Finally, everything is recorded in e-commerce. This is a great opportunity to avoid common problems such as incorrect record keeping and loss of documents.
As a result, I think it would not be a mistake to say that this is a tradition that we no longer have many chances to meet and that is about to be buried in the dusty pages of the history of digitalization. Of course, if we consider that more money has been earned on this tradition for hundreds of years than we can count, then we can say that this is a tradition that will always be talked about…