Home Entertainment What did you do Karen? Michi becomes Tanjiro from Kimetsu no Yaiba 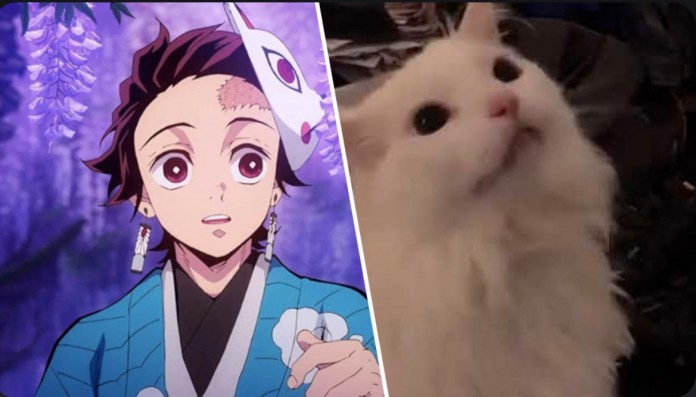 This time we share with you a cosplay of Tanjiro Kamado from Kimetsu no Yaiba, only this time with a cat cosplayer. Kimetsu no Yaiba continues to attract a lot of attention even though his story is over. All due to his anime, whose second season is on air.

This comprises an adaptation of his first animated film, which was adapted for television, as well as original episodes.

It is because of the above that his popularity prevails among the fans; this will continue until the end of its broadcast. The same applies to its protagonist, Tanjiro.

Tanjiro Kamado is the hero of Kimetsu no Yaiba

Despite what has happened in the series, this young demon hunter is not daunted. Yes, he may be a bit of a crybaby, but he always acts like he should. Besides that he doesn’t overthink things, something that happens to characters from other series.

For example, Izuku Midoriya from My Hero Academia or Takemichi Hanagaki from Tokyo Revengers. Tanjiro always acts and fortune has smiled on him more than once, putting his rivals in trouble.

His evolution throughout Kimetsu no Yaiba is very satisfying. This is why he has so many fans, who like him that in addition to being a skilled and resourceful character, he stands out for his great heart.

He goes to the degree of feeling pity for his enemies, regardless of whether they are demons. Even some of his adversaries are impressed by the purity of his soul, something that was seen in the first film. It almost seems like he’s a saint!

This cosplay shows it in a more catlike way

For all the above, Tanjiro remains very popular, so fan arts and cosplay are very common. But the cosplay that we bring you now is quite cute, since it was not a person who played this character.

Actually, it is a nice “michi”. In a video shared on the apolocatv account of Tik Tok we can see the process of disguising this cat. From what he looks like he’s pretty comfortable.

Nothing weird considering that this is one of the many cosplays that he has done. The person who dressed it baptized it Catjiro and it turned out quite well. Maybe the only weird thing is the extra hair he puts on her.

We thought he might have looked better without it. I wish I had added a little sword to complement it. Despite the above, it is undoubtedly a nice and funny interpretation of the protagonist of Kimetsu no Yaiba.