Home Entertainment What did Obi-Wan Kenobi say to Luke Skywalker? 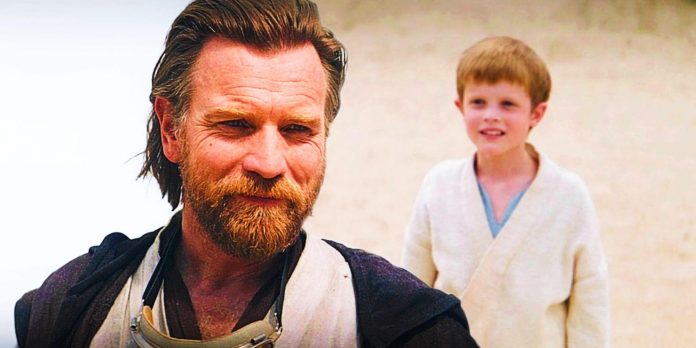 The series finale of Obi-Wan Kenobi sees Ewan McGregor’s character finally meet Luke Skywalker, but doesn’t include what the Jedi actually says to the young boy. Disney+’s Obi-Wan Kenobi picks up approximately 10 years after Revenge of the Sith and nine years before A New Hope, with the title Jedi Master being introduced to both Luke and Leia as 10-year-olds. The series answers many leftover questions from the Skywalker saga and better contextualizes the events depicted in A New Hope, but also manages to leave certain mysteries that the possible Obi-Wan Kenobi season 2 could solve.

In Obi-Wan episode 6, Kenobi finally returns Leia home to Alderaan while battling Darth Vader for yet another time. After defeating Darth Vader but leaving him alive, Obi-Wan’s old Padawan explains that it was not the Jedi Master that killed Anakin Skywalker, but Vader who murdered the Jedi himself. Having confirmed that Anakin was not his failure, Obi-Wan Kenobi leaves with the understanding that his old friend is truly dead, but must still ensure that Anakin’s children are safe and elicit the good of what they inherited from their father and Padmé. As such, Obi-Wan Kenobi’s finale episode features the Jedi returning to Tatooine to save Luke from Reva, who nearly kills the boy as revenge for what Anakin had done to the younglings during Order 66. In the end, Reva spares Luke’s life, with Obi-Wan vowing to let Luke live a humble childhood with his aunt and uncle.

When Owen finally allows Obi-Wan Kenobi to meet Luke, their first official interaction is cut off, leaving this novel conversation a mystery. Obi-Wan walks over to Luke with a smile while the wide-eyed farm boy looks up at the old secret Jedi Master, with the only words of the conversation heard being Kenobi’s signature “hello, there.” After this, the Obi-Wan Kenobi season 1 finale cuts to the title character riding beyond the Dune Sea alongside the Force Ghost of Qui-Gon Jinn (Liam Neeson), with no direct reveal of how his meeting with 10-year-old Luke Skywalker commenced.

With Disney+ TV shows like Obi-Wan Kenobi and Ahsoka attempting to fill in the gaps of the Star Wars timeline that have been left largely unexplored, much of the mystery from the Skywalker saga has been solved. However, Star Wars has already revealed that Luke knew Old Ben as a hermit on Tatooine, so their meeting before A New Hope was no secret. What was mysterious, on the other hand, was the circumstances of how they were first introduced, and what their conversations looked like before Obi-Wan taught Luke about the Jedi. Obi-Wan Kenobi had just spent six episodes documenting how the former Jedi Master’s perception of the twins changed after his time with young Princess Leia, so a meeting with Luke would have followed the same path of a friendly greeting before moving on.

There didn’t need to be a conversation between Luke and Obi-Wan; viewers already understand how they become reacquainted in the future, and a heartwarming meeting wouldn’t have added anything new to what his misadventures with Leia just explored. Obi-Wan Kenobi’s main character didn’t hold a long conversation to foster a new relationship with Luke because he couldn’t let the boy know who he was just yet. Obi-Wan knows that Luke is safe with Owen and, like Leia, has the positive qualities of both Padmé and Anakin to guide him; meeting him was a culmination of the past 10 years’ worth of isolation, but this wouldn’t lead to anything meaningful until A New Hope.

What Obi-Wan Kenobi Could Have Said To Luke

After his iconic “hello, there,” line, Obi-Wan likely told Luke that he was an old friend of the family and had brought him a gift. Wanting to better understand Luke as a typical farm boy with no hints of his father’s evils, the Obi-Wan Kenobi missing scene was perhaps also filled with inquiries about wanting to be a pilot, what activities he enjoyed, how old he was (even though Kenobi already knows), and simple questions about his childhood. Whatever conversation commenced, Obi-Wan left their meeting satisfied and felt safe to leave Luke with Owen and Beru for a normal boyhood on Tatooine. Anything that Obi-Wan Kenobi could have said to Luke beyond vague greetings would have potentially caused continuity issues with A New Hope’s version of the characters.

While Obi-Wan Kenobi was conceived as a limited series, the director Deborah Chow and star Ewan McGregor have teased the possibility of returning for Obi-Wan Kenobi season 2. Obi-Wan Kenobi only depicted a short timeframe in the title Jedi’s 19-year exile on Tatooine, which still leaves the character with nine years on the planet before A New Hope’s timeline begins. Whereas Obi-Wan season 1 established the connection between Kenobi and Leia, season 2 can better underscore his secret protection of Luke Skywalker on Tatooine. It’s unclear what Obi-Wan said to Luke during the missing scene in the Obi-Wan Kenobi finale, but their meeting still sets up the notion that the two will connect again before A New Hope. If so, Obi-Wan Kenobi season 2 can finally reveal how Luke reacted to meeting the old Jedi, and how his perception grows to simply refer to Obi-Wan as a “strange old hermit.”

BLACKPINK: Jennie Was Very Supportive And An Angel To Jung Ho...