Home Celebrity What are the most viewed music videos on YouTube Mexico in 2021? 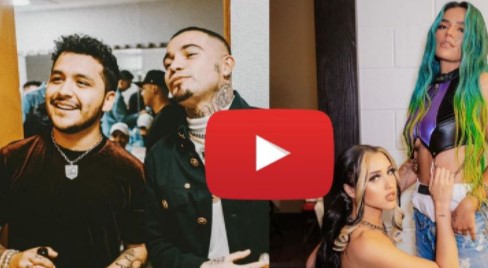 From regional Mexican to reggaeton, these are the 10 most played videos on YouTube Mexico during 2021.

The last days of 2021 are approaching and the time has come to recount all that we did over the course of 12 months, from the purposes accomplished, goals achieved, to the music we listen to and the music videos that marked our year. If YouTube Mexico is one of the platforms you use the most to play your favorite songs, the following count interests you.

Below we will show you a selection of the 10 most played videos nationwide on YouTube Mexico throughout 2021, this according to information collected by Forbes magazine, the same list in which regional music and reggaeton predominate.

The unexpected collaboration that unites the emotional Mexican regional of Christian Nodal and the powerful rap of Gera MX, “Botella Tras Botella”, in its official music video, managed to accumulate more than 414 million reproductions so far, becoming one of the most seen of the year in the country.

The video clip with which Karol G and Mariah Angeliq made everyone dance by singing “Ando por hay con los de siempre, un flow cabr * n / Giving back in a machine”, triumphed on YouTube Mexico with nothing else and nothing less than 558 million views.

Although he did not release any LP this 2021, Bad Bunny continued to reap achievements with his greatest hits published last year and also with his new singles, among which he highlighted “Yonaguni”, a song that captivated audiences from his catchy reggaeton to dance and cry until its final verse in Japanese and the sample of it are the 461 million views on the famous video platform.

After having achieved great popularity since the beginning of the confinement, Rauw Alejandro reiterated himself as one of the great revelations of the urban and “Todo De Ti” came to show him as a versatile artist capable of leading popularity charts and reaching 427 million reproductions in his official music video published through YouTube Mexico.

Natti Natasha and Becky G came together again in 2021 to rectify the success of “Sin Piajama” in their most recent collaboration: “Ram Pam Pam”, which has already exceeded 418 million views on its official portal channel.

The Weeknd – “Save Your Tears

What was the most played video on Youtube Mexico this 2021? Leave us your comments and remember to follow us on our social networks for more information on your favorite artists.

MONSTA X announces their next return to the stage