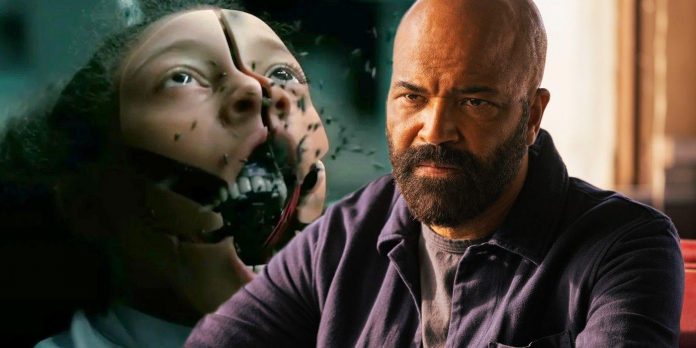 Time to question the nature of our reality all over again, as Westworld season 4, episode 3 reveals the true purpose of Hale and William’s Golden Age park. To the surprise of absolutely no one, mysteries are beginning to pile up in Westworld. Thandiwe Newton’s Maeve and Aaron Paul’s Caleb accidentally found themselves entering Delos’ new park, the Golden Age, at the end of episode 2. This prohibition-era resort represents enemy territory for our two Westworld protagonists, as Charlotte Hale (Tessa Thompson) and the Man in Black (Ed Harris) continue to plot humanity’s downfall.

Westworld season 4 remains a long way from spilling its secrets, but “Annees Folles” leaves plenty to unpack nevertheless. The sinister true purpose of Golden Age is revealed, Bernard’s plan to save the world is teased, and Caleb comes face-to-freaky face with his own daughter. Here’s Westworld season 4, episode 3’s bonkers ending fully broken down.

On the outside, Delos’ Golden Age heralds the company’s grand rebirth. It’s the first park built since season 2’s WestWorld massacre and, thanks to William and Hale replacing key politicians with host copies, also the first constructed on American soil. Unbeknownst to eager guests, however, Delos’ human owners have been replaced by robotic hosts, begging the question of why a new park was built in the first place…

Whereas previous parks comprised two levels – the actual game and the “behind-the-scenes” – Golden Age is a three-tiered facility. As before, the historical resort part sits on top and the scientific operation level is located at the bottom, but Golden Age’s big new feature is a newly-added middle layer. Perfectly recreating WestWorld’s old backstage area with its glass labs and robot testing rooms, this level is another stage of the park’s “fun.” Inspired by Dolores’ action-packed breakout from Westworld season 2, Golden Age guests can now join the bloodshed by recreating the WestWorld massacre in all its gory glory, killing hosts dressed as Delos employees and rampaging through the near-identical labs.

Hale must’ve included this storyline purely to make a point about humanity’s violent nature – fervent guests will happily act out a real-world mass-murder for their own sick amusement.

Golden Age’s true underground area is operated by fully-automated and personality-free white drones typically used instead of sentient employees for top-secret Delos projects. The drone hosts are creating a black tar-like substance – the same stuff that oozed from Anastasia Whitney’s head after Maeve shot her in Westworld season 4, episode 2. Said weird goop is then imbued into flies, which episode 3 seemingly confirms are natural insects, not diddy little robots. This “Annees Folles” scene explains the fates of the Cartel gang member from Westworld season 4’s premiere, the Department of Justice’s Jim Navarro, and Anastasia Whitney. All three had goop-infected flies forcibly inserted into their bodies, and all three became subservient to Hale and William’s commands.

Not only does this goop turn humans obedient, it affects the flies’ behavior too. Insects don’t typically crawl into your eye by choice, but these critters have been modified to seek flesh and blood, as demonstrated when they gather behind glass in front of Caleb rather than the mechanical Maeve. Once a fly has entered a human vessel, control is activated by a series of four musical tones outside of audible range – the type of noise a malfunctioning TARDIS might make. These sounds can force a human to carry out tasks anywhere between handing over an opera ticket to shooting oneself in the head.

Underneath Golden Age is a testing facility for this fly-goop-noise combo, designated under the misleadingly chirpy title of “Project Chrysalis.” Among the guinea pigs is Navarro (following his capture in Westworld season 4, episode 2), and it’s clear the controlled humans are putting up an internal fight against their new programming.

An important question: why is the Project Chrysalis testing facility located directly underneath Delos’ Golden Age theme park? The answer can be found on the table Maeve and Caleb sit at during their saloon visit. Remarking on how the drinking establishment’s standards have slipped since her days as a host, Maeve notes a dead fly next to her arm. We can probably assume Golden Age is a honey trap, luring human guests somewhere they can all be infected by Delos flies en masse.

Is Caleb’s Daughter A Host In Westworld Season 4?

Put simply, no – and nor are the Project Chrysalis test subjects. The underground facility Caleb and Maeve infiltrate is filled with real humans like Navarro, aside from one old-fashioned host made to resemble Caleb’s daughter, Frankie. The archaic face-opening design (used for the very first hosts Robert Ford created) probably accounts for why Maeve doesn’t immediately sense Frankie is a robot.

Remember, Maeve and Caleb were lured to Golden Age by Hale. The infected Anastasia Whitney gave them the invitation, which means Westworld’s villain knew her enemies were coming.  The host Frankie is intended to catch Caleb off-guard, and when the ploy (understandably) succeeds, he gets a swarm of flies to the face. The entire operation – the opera, host Frankie, William keeping Maeve busy – was apparently designed to ensure Caleb got a fly in his ear. Quite why Aaron Paul’s character is so important remains to be seen (must be science, bitch!) but after the riots of Westworld season 3, perhaps Hale recognizes Caleb’s annoying natural ability to inspire other humans. Or maybe because Caleb was close with Dolores, Hale believes he can unlock the Sublime data almost certainly stored inside Hoover Dam.

Westworld’s real Frankie is fine. Hale and William sent a host after Caleb’s family (maybe hoping to gain further leverage), but the smarter-than-her-years youngster realized her dad’s friend had been replaced by an impostor, and they escaped just in time. What becomes of Caleb’s daughter next isn’t clear, as she and her mother run onto the streets without supplies or anyone to protect them.

What Weapon Is Bernard Looking For In Westworld Season 4, Episode 3?

Away from Golden Age, Westworld season 4, episode 3’s ending finds Bernard and Stubbs accompanying their new friend into the desert. They rendezvous with a crew of human resistance fighters searching for a weapon buried beneath the sand, but what could possibly be worth countless days trawling through the dusty wilderness?

Related: Why Christina’s Stalker Already Had A Memorial In Westworld

“Annees Folles” only offers one real clue – the placement of Bernard’s narrative compared to season 4’s present day. Westworld already confirmed Caleb and Maeve’s storyline is happening seven years after season 3, by which point we also know the fight against Incite is over. Caleb’s wife even chastises him for clinging to a war that’s already won. In Bernard and Stubbs’ timeline, the human resistance is not only back together, but way more organized and prepared than during the Incite riots. Significantly, Stubbs notes Bernard was asleep for “years,” but deliberately doesn’t specify a number. Bernard’s timeline must, therefore, be happening further into Westworld’s future.

If a timeline split is occurring here, the weapon Bernard seeks could be a host – a robot who’s active in Westworld season 4’s present, but who doesn’t necessarily stay that way during Bernard’s lengthy slumber – or a disused Delos computer containing vital information. Alternatively, Dolores might’ve left a special something behind before she died – a weapon to liberate humanity just in case Incite (or, indeed, Delos) ever undid the revolution she began.

What to expect from the September Assassin’s Creed event?