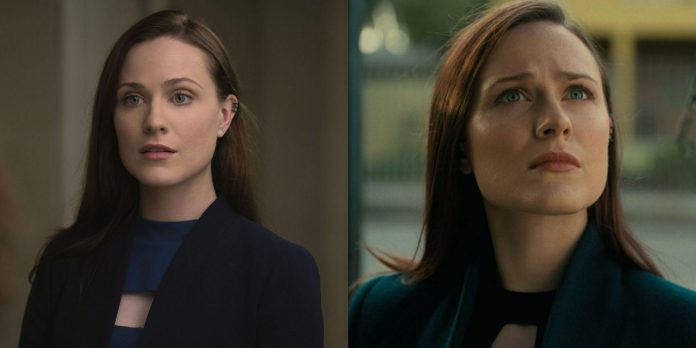 Warning: This article includes spoilers from episodes 1-3 in season 4 of Westworld.

One of the biggest mysteries in season 4 of Westworld is who Christina is and what her real role is in the story. Christina is played by Evan Rachel Wood, who played Dolores in the previous seasons of Westworld.

Other than a different hair color, Christina looks like Dolores, but it is currently unclear who Christina is, how she is connected to Dolores, and what is happening to Christina in a storyline that appears to be taking place in a futuristic version of New York City. Based on the clues that have been dropped in the first episodes of season 4, fans have taken to Reddit to share their theories about what they think is going on with Christina.

A Future Where Halores Won

Redditor Piano_Man_1994 believes “the events of Christina and her world are decades after what we’re seeing with Maeve and Halores. Hal was able to win this conflict and create a world of Hosts.”

RELATED: 10 Great Examples Of Foreshadowing In Westworld That Paid Off

This would not be the first time that Westworld has played with multiple timelines. It means that Christina is a host living in the aftermath of this conflict, a future where she does not realize she is a host, and humans are controlled by the mysterious tower that was mentioned in the first episode. If this theory is true, it does not bode well for Maeve or Caleb, as it means they failed to stop Halores, and their fates likely aren’t anything good.

The Human Dolores Was Based On

Instead of the Christina storyline taking place in the future, Reddit user Mr.Tibs92 believes the Christina storyline is taking place in the past, before Westworld even existed. The theory is “What if Christina is the original human that Dolores is based on. What if Ford or Arnold worked with Christina or somehow acquired the stories from the game studio and used them as the basis for the narratives of the original hosts. From what I can tell, Delos doesn’t seem to be a known brand in Christina’s time.”

The legacy of Dolores would become even more complicated if she is based on a human, especially with Halores being a copy of Dolores, and Halores now wanting to control humanity. It is a fascinating concept, a way for Jeffrey Wright to play Arnold again, a way for Ford and his unforgettable quotes to become part of the show again, and a means of providing greater context around the creation of hosts and Westworld.

Fans have noticed many parallels between the stories of Dolores and Christina that go far beyond their physical appearances. Redditor JDPRIMUS1234 suggests that “Christina is a mirror of Dolores in the park. Both started as hosts who were unaware they’re hosts. As an unaware host Christina has infiltrated human society. Other unaware hosts have infiltrated human society. When the time is right. The hosts will wake up & revolt. Just like they did in the park.”

RELATED: 10 Things To Remember Before Season 4 Of Westworld

Christina likely would’ve been sent by Halores to infiltrate and better control human society, with Christina not realizing her true mission. After Dolores led a revolution against the humans who enslaved the hosts, it would be ironic for a copy of Dolores (Halores) to enslave hosts, only for a new version of Dolores (Christina) to now lead a revolution against the host (Halores) controlling their kind. It’s a dizzying thought, but it feels on brand for Westworld and its exploration of identity and justice.

The Martin Connells Copy Of Dolores

One of the Dolores copies in season 3 took on the physical guise of Martin Connells. This host’s physical body was destroyed in an explosion and the control unit was damaged. Westworld villain Engerraund Serac recovered the damaged control unit, with Halores later stealing it for herself. No one knows what happened to the control unit after that.

Reddit user ThatOutlandishness75 believes “Christina is the damaged copy of Dolores (remember Martin Connells?) taken away and kept by Halores from S03” and “Christina is being used by Halores to babysit host consciousness in the sim world.” Christina being a repaired version of the Martin Connells copy of Dolores would explain some of the similarities between Christina and Dolores. In terms of what Christina is doing, the theory is that Halores is using her to control other hosts in a simulation through the videogame narratives that Christina writes.

A Mix Of Maeve & Clementine

Instead of being based on one personality or consciousness, Redditor Mggl2019 thinks “that Christina is a combination of Clementine and Maeve.”  As shown in some of their most iconic scenes, both Maeve and Clementine have been able to control other hosts. Christina may be able to control hosts, as evidenced by her videogame narratives controlling people’s lives and getting the people to leave the mental hospital via a muttered verbal command in the second episode.

Christina wearing blue could be a hint to her being based on Clementine. The dynamic between Christina and her roommate is also a little similar, with the two of them discussing similar topics like nightmares and advice about men as they shared during their narratives in season 1.

An Older & More Innocent Version Of Dolores In A Simulation

Christina Is Not In A Simulation

Reddit user grumpy_svaln has raised a valid reason why Christina probably isn’t in a simulation: “in S3 the simulation scenes were always in a different resolution to distinguish it from the real world. And Christina scenes were all in normal resolution.”

Whenever characters have been in a simulation in the past–such as the Warworld simulation Serac put Maeve in during season 3–the show uses a wider aspect ratio. This Redditor thought the show may have abandoned that trick at the start of season 4, but episode 3 revealed that the show is still doing this, as the wider aspect ratio was used when Bernard was in the Sublime. Unless the show is deviating from the precedent they have set, Christina might not be in a simulation after all.

Christina Is What Remains Of Dolores’ Consciousness After Her Sacrifice

Redditor Narrow_Act858 offers one of the more straightforward Westworld theories that could be proven right, which is that “Christina is simply what’s left of prime Delores put into a simulation by Hale in hopes of finding the forge/sublime. I know they said she was completely wiped in season 3 but is it really I stretch to think there was some corrupted data there still to sift through?”

This means that Dolores’ consciousness was not completely wiped away and now exists in the form of Christina, who doesn’t understand who or what she actually is. Halores has placed her in the simulation to try and extract the information needed to get the data from the Forge and access the Sublime.

Rewriting The Lives Of Guests Who Visited Delos Parks

Reddit user Roomatej posits that Christina “is re-writing the lives of people. Real-life people. She’s using the data that delos has on past park visitors. Obviously Peter had money. You don’t donate a whole hospital wing on the salary of a janitor or whatever. I think he was a guest at the park.”

This means that any guest who has ever visited Westworld, Shogun World, the Raj, the new Golden Age park, or any of the other Delos parks can be controlled through the stories that Christina writes. These humans might all be under the influence of the infected flies, with Christina and Olympiad Entertainment then dictating the path the infected humans take.