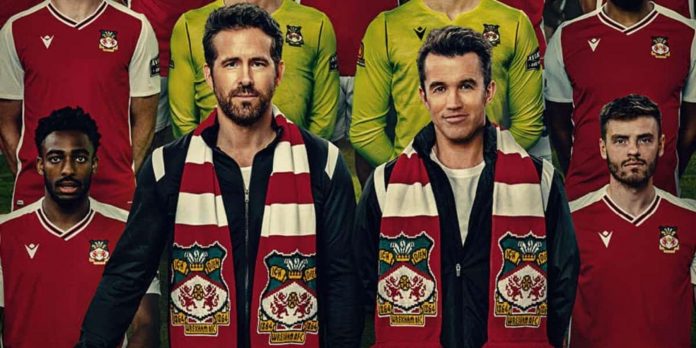 He’s finally back home. “Welcome to Wrexham,” a documentary series presented by actors Ryan Reynolds and Rob McElhenny as an integral part of their takeover of Wrexham AFC, is already here, and the first two episodes are entertainment and a story that can’t help but compare to one. of the biggest shows right now, Ted Lasso.

This is because, in fact, the history of Wrexham is a loser’s story, very similar to the story of Coach Lasso and AFC Richmond. an approach to what makes Wrexham unique, to its people. In this sense, the aptly named “Dream” and “Reality” perfectly convey McElhenny’s idea, his motives, as well as why Reynolds was the ideal business partner for this venture.

First, a bit of history, which the series does not directly address, football in most of Europe often followed money in the early 1900s, which is why currently the largest clubs in the world are based in large port cities or former industrial megacities such as Liverpool, Manchester, Barcelona or Milan, and why the predecessors of this kind sports such as Wrexham disappeared as soon as small towns ceased to be a large enough market to support the growth of this sport. That’s why Keb Mo’s rendition of Bob Dylan’s “The Times They Are a-Changin” is so appropriate for the opening credits, because Wrexham AFC is a symbol of the changing history of football then and now.

McElhenny’s fascination with the promotion system of European football prompted him to realize the dream of Wrexham, the same dream that was realized by American businessmen who own top-level clubs, with Chelsea being the last to be added to this list. For this to happen, money in Philadelphia is always sunny will never be enough, instead McElhenny needed Reynolds Deadpool money, Marvel superhero money.

The takeover is portrayed as an incredibly smooth affair with the actors achieving almost unanimous approval from the trust running the club, as Wrexham fans and people in this city are in dire need of hope, both in football terms and in life. This is what allows viewers to meet some people whose lives revolve around the club, or those who just decided to devote their free time to the Wrexham cause.

One notable case is Spencer Harris, who devoted his free time to running the club’s business before the buyout, and given that Wrexham was on the rise by the time Reynolds and McElhenny came to power, it’s fair to say he did a remarkable job. This is the past tense, as in the word “did”, because “Welcome to Wrexham” conveys well the idea that change is the name of the game for the club in this new era, which means that many people the public meets will not stick around. too long.

While Harris currently holds the title of honorary vice-president at Wrexham, coach Dean Keats is being kicked out the door by the time the second episode ends. Keats was hired by Wrexham at the end of 2019, when the club was at an all-time low, being at the bottom of the National League, and despite his efforts, Wrexham fought until the very end of the 2020-21 season for a promotion spot. the playoffs, which is simply not enough for the new ambitions of the club.

Several people are invited, such as Humphrey Ker, McElhenny’s British pal who brought him to football, or Sean Harvey, an experienced football executive who was hired to help Wrexham progress. The fact is that the series necessarily emphasizes that football at these lower levels is very uncertain for all parties involved, which probably explains why there are only 9 players left in the current Wrexham squad from the 2020-21 team presented here.

Among the lucky ones is Jordan Davis, who not only had a great season when the Hollywood duo came to power, but was also born and raised in Wrexham, which made him the perfect poster boy for the current history of the team. On the other hand, there is Paul Rutherford, a veteran who has entered the final stage of his career and whose actions led to him being expelled from the club after a season-defining mistake caused him to burst into tears after seeing a red card at the most inopportune moment. .

Overall, “Welcome to Wrexham” does a great job of depicting the ups and downs associated with running a professional football club, at a level that feels much closer to home than even what Ted Lasso portrays. At the moment, Wrexham entered the 2022-2023 season still stuck in English football’s fifth competition (so no FIFA 23 guarantees), and what happened in Reynolds and McElhenny’s first year doesn’t deserve spoilers, but it’s worth it. see.

For Reynolds and McElhenny, Wrexham can be both a business and a passion project, and if “Welcome to Wrexham” feels over-produced or staged at times, it’s because it was a big part of their presentation.