Home Celebrity “We splashed in the water” — Meghan Markle reveals details of her... 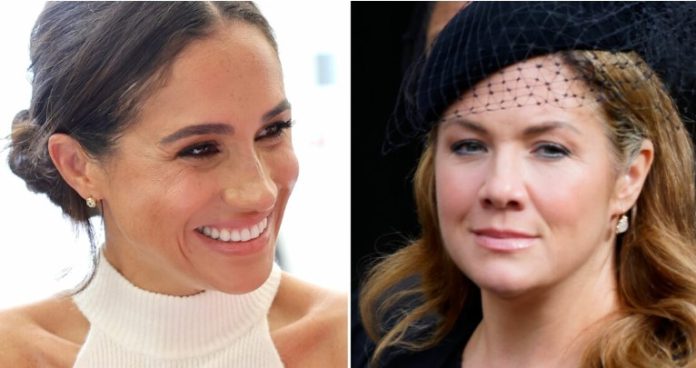 Did you know that Meghan Markle is a good friend of Canadian Prime Minister Justin Trudeau’s wife Sophie Gregoire Trudeau? The two have been friends for several years, and they first met when Markle was pursuing her acting career while living in Toronto. The Duchess of Sussex invited the First Lady of Canada to the eighth episode of Good Wife / Bad Wife, Good Mom/Bad Mom of her Spotify Archetypes podcast.

In the episode, Markle and Trudeau discussed the stigmas associated with being a wife and mother. They also recalled the early days of their friendship, openly sharing details about their spouses and children. The depth of friendship between the two modern women can be judged by the fact that earlier this year Trudeau visited the Sussex Montecito house in California with his children.

During the episode, Meghan Markle revealed intimate details of Trudeau’s day in California. The Duchess shared that the two were not in their best outfits, as the whole walk was to enjoy each other in disheveled curly hair and in swimsuits. They spent some time chatting with each other under the sun.

“We swam, drank wine, splashed in the water,” the former actress mentioned in a podcast about their life together. According to her, it was not the day of wives and mothers with modest smiles and well-groomed appearance. Instead, it was a day of bathing suits, belly laughs, hugs with kids and girly conversations.

Sophie Trudeau has three children with her husband Justin Trudeau, namely Hadrien, Ella-Grace and Xavier. Meanwhile, Prince Harry and Meghan Markle have two children, Archie and Lilibet. During the conversation, the graduate of “Force Majeure” also defended her dear friend, claiming that she is much more than just the wife of the Prime Minister of Canada. Markle hailed Trudeau as an activist, humanitarian and friend who cares deeply about the people he loves.

Have you listened to the eighth issue of “Archetypes”? If so, let us know your thoughts in the comments.