Home Entertainment We OFK: 7 things we liked about the game 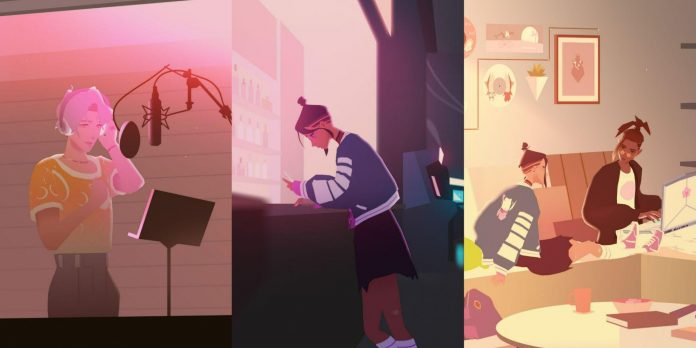 How much control should players have over the game they are playing? Should the player be responsible for micromanaging the decisions of each resident of the city? Should they set a course for one hero’s journey? Are there cases when the most fascinating gameplay is more passive, allowing the player to have only minimal influence on the development of the story?

We Are OFK is a great musical biographical/visual novel with minimal player intervention other than the choice of dialogues. Despite this more passive style of play, We Are OFK tells an exciting story about youth, art, and the difficulties of following your dream in a world that often doesn’t care. The game is so different from other video games that it’s easy to see the elements that make the game great. Here are some things we liked about We Are OFK.

We Are OFK is an incredibly beautiful game. This is absolutely necessary as it is a visual novel/interactive movie that borders on not being a game at all. If the visuals didn’t hold up, players wouldn’t want to stare at them for hours, as happens with the best games in the genre.

Fortunately, We Are OFK is undoubtedly great. Almost every artistic choice made by his design team is accurate, creating a soft, mesmerizing version of Los Angeles that it’s impossible not to get involved in. The lack of traditional gameplay doesn’t matter when everything looks so good. The superiority of the images of the game includes fantastic character design, as well as a simple but convincing setting, and the overall visual effect is as cohesive as it is strong.

We Are OFK is about a fictional band, so the music should be amazing, and that’s the way it is. Not only is the band’s actual sound great, but the music and sound design are stellar throughout. Perhaps the best thing about the soundtrack is its ability to easily capture and create a mood. There is a lot of pressure on the soundtrack in this game, not only because the story revolves around the band (which makes the music an obvious centerpiece), but also because the story lends itself to musical manipulation.

It’s no secret that a song can affect how players relate to the stage, and with such a delicate emotional story — the aspirations of young people headlong into capitalist demands — the wrong choice of music could spoil many impressive moments, effectively kill the whole project. However, thanks to the excellent score in the game, this never happens, and instead players get one of the most soothing soundtracks.

We Are OFK is presented sporadically, and although it may not be the longest story of its kind, it still has something to offer. Although there are many games that have been released or divided into episodes, We Are OFK interprets this idea more specifically and literally. Not only is the player’s input limited, allowing him to experience many events as a spectator rather than an active participant — with all the pleasures and worries that can cause — this directly reflects the experience of streaming the show.

When the player pauses the game, a timer is even displayed at the bottom of the screen showing how much time is left until the current episode. It would be easy to get too carried away with this premise and make the whole experience useless rather than fascinating, but We Are OFK never crosses that line.

Luka is a game developer who dreams of making music, but struggles with his anxiety. Carter is a visual effects genius who struggles to contain his feelings. Itsumi is unhappy with her current job as a social media manager and dreams of becoming a concert pianist. Jay is a sometimes intimidating audio producer who is wary of friendships between others.

The characteristics of the game always seem authentic, which is very important for this kind of games. The motives, background and emotions of the characters are convincingly developed and consistently maintained. There are no sharp moments in which the actions of the character seem completely inexplicable and wrong. Decisions are always based on what the characters want and what they feel, which makes it easier to dive into the story.

Each chapter ends with a mini-game dedicated to the band’s newest single. All of these games are basic in both their concept and controls, and there are no serious performance-related bets in them. Although some players may be put off by this cold presentation, it is perfect for We Are OFK. Great life games are usually more interactive than this one, but that’s not for the worse.

This is not a crazy party game: it is a relationship simulator and a visual novel about the realization and failure of a dream.

Stranger Things: Everything We Know About The Demogorgon Monster