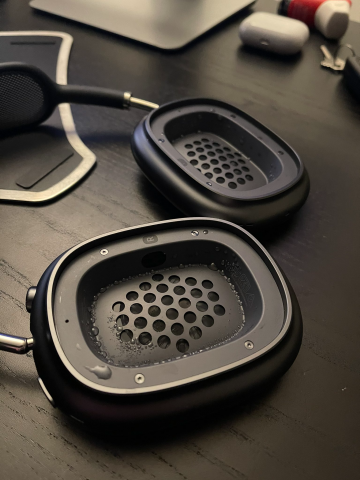 According to the photos shared on social media and stories told, Apple AirPods Max sweats drop by drop when used for a long time in a cold environment. Moreover, this problem cannot be avoided due to the metal body of AirPods Max.

Apple officially announced the AirPods Max, the first on-ear headset model, last month and released it shortly thereafter. The AirPods Max has been criticized a lot for its high price tag, despite its high-end features and extremely stylish design, and now it looks like a new problem has arisen that could be troubling Apple.

According to the social media posts of some users, AirPods Max has a serious condensation problem. Due to this problem, a serious amount of water droplets form on the earpiece and these droplets move towards the drivers of the earphone through the sound transmission gaps. In a rough phrase, we can say that Apple AirPods Max is “sweating”.

As a matter of fact, it is not unexpected that there is a condensation problem in AirPods Max. Because AirPods Max, unlike most of its competitors, has a metal body and due to basic physics rules, when cold metal enters a hot and humid environment, condensation occurs on it. This is exactly what happens when you wear the headset for a long time, and condensation occurs due to the cold metal, moist because of sweating and your skin that is warm because it stays indoors.

The visuals shared by users and the complaints described are exactly in line with this scenario. Because, in the images shared, it is seen that there is condensation in the part of the AirPods Max that is just below the ear pad and partially touches the skin of the user. Another user commenting under this photo and claiming that he has a similar condensation problem states that the condensation takes place during 40 minutes of light walking and 1 and a half hours of watching movies.

Apple has not made a statement regarding the said condensation issue with the AirPods Max. However, as mentioned above, it is a fundamental physics rule that condensation occurs when a metal in a cold environment is exposed to a hot and humid environment. Therefore, it is highly possible to come up with an explanation that the condensation problem in question is due to ambient conditions rather than a design defect.