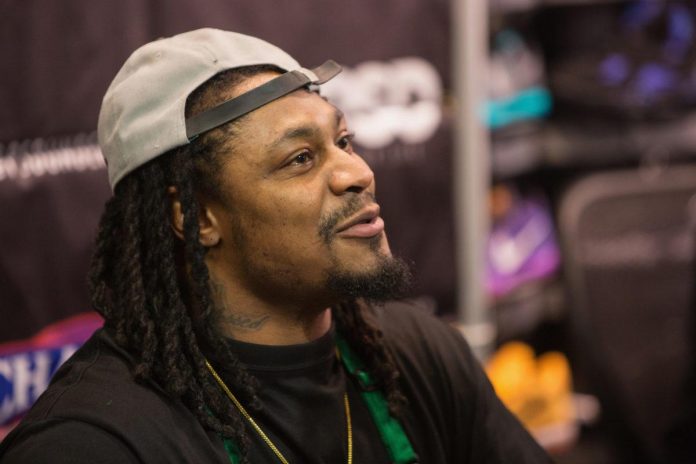 According to TMZ Sports, Las Vegas police found Lynch asleep at the wheel of a 2020 Shelby GT500 at 7:25 a.m. on Tuesday. According to a police statement, Lynch told police he stole a car, but did not drink or use drugs.

The five-time pro bowler was also dragged out of the car after he allegedly refused to get out, as a video from the New York Post shows.

Here’s more on what the video shows, via the New York Post:

The video shows 36-year-old Lynch talking to police through an open door on the driver’s side of his car. When the officers ask him to get out of the car, Lynch refuses to comply, resulting in them forcibly pulling him out of the car.

“Now, if you don’t get out of the car, you will be charged with obstructing the investigation,” the officer tells him. “This is a criminal offense and you will go to jail.”

Lynch asks for further explanations, which are not given before the cops pull him out of the car, which Lynch reportedly told the cops he stole.

The video also shows that the front left wheel of the car that Lynch was allegedly driving was completely missing.

Lynch’s lawyers issued a statement that he was not stopped for drunk driving.

“Marshon was not stopped for drunk driving. Rather, the car was safely parked and not operated,” the report says. “We are confident that when all the evidence is presented, it will not be a DUI under Nevada law. Marshon appreciates and is grateful to everyone for their care and support.”

We will have more when it becomes available.

The NFL World’s reaction to the Bengals’ Disastrous Start