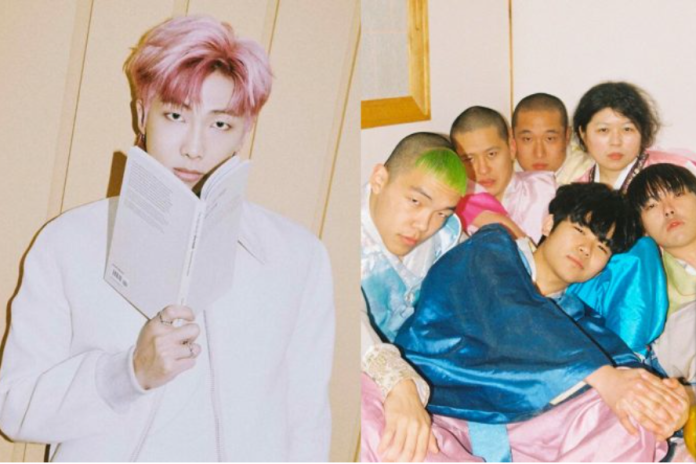 The two performers gave an unexpected joint performance at a charity event in Seoul.

RM from BTS performed “Sexy Nukim” with Balming Tiger live for the first time today (October 28) — scroll down to see the performance footage below.

The BTS leader and rapper teamed up with the “alternative k-pop” group for their latest single, which was released in September.

RM joined Balming Tiger on stage for the first time to perform the track together at an event held tonight in Seoul W Korea as part of the breast cancer awareness campaign Love Your W. Footage posted on social media shows the star lip-syncing to a track from the crowd before joining the band on stage to perform his verse.

After his lines were finished, he joined the rest of the Balming Tiger members, performing their synchronized dance moves in the chorus. Watch the footage of the performance below right now.

Speaking about the collaboration at the time of its release, Balming Tiger said that RM’s role in Sexy Nukim “can never be replaced by anyone else.” “Until now, there has never been a principle that all songs should be completed only by our members,” they told DIY.

“Until now, there were no peculiarities in the songs, because we thought that it was our members who could understand and express our songs the best. We believed that RM would be able to express it better than anyone else in this song, and we were very satisfied with the results.”

They added that they “ended up using the lyrics and rap style that he sent us for the first time.” “He understood the music 120 percent and drew his own style in the flow of the track,” explained the band members. “And because he is such a humble and charming character, we were able to have fun throughout our work with him.”

Back in July, RM shared live that his next solo record was “90 percent ready.” “I’m just turning on the live stream to say… follow my album, stay tuned,” he told fans. “I am close to completing my work on the album. I’m not sure how things will go from here, but I’ll probably be the next member after J-Hope to release his solo album.”