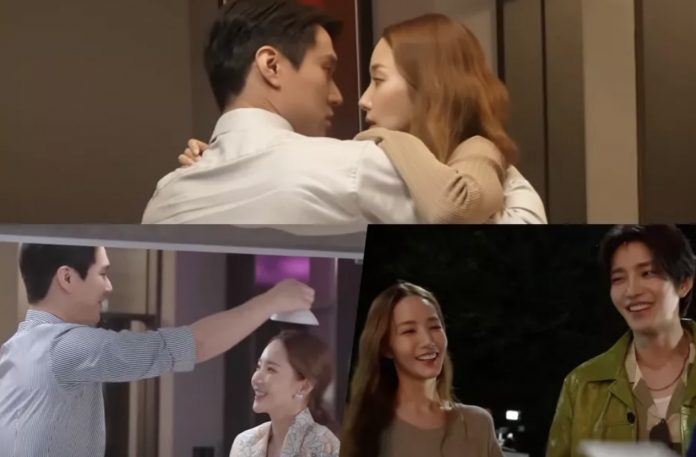 Park Min-yeon, Go Kyung-pyo and Park Jae-yeon have demonstrated their devotion to both romance and comedy in the new video “Love in Contract”!

“Love in Contract” on tvN is a romantic comedy about a service that provides fake wives to single people who need partners to bring them to social events such as school meetings and dinners for married couples.

The new video begins with Park Min-yeon and Go Kyung-pyo sharing ideas and rehearsing different approaches to the upcoming scene. After that, they prepare for the washing-up scene. Go Kyung Pyo jokes that he has to open the closet for Park Min Young because of her small stature, and the actress replies incredulously, “Sorry, but I can open it. I’m over 160 centimeters tall [about 5 feet 2 inches].” When she opens it, Go Kyung-pyo jokingly looks shocked, causing Park Min-yeon to roll her eyes and comment, “I’m furious.”

The duo is later joined by Park Jae-yong as they film a scene where Go Kyung-pyo runs into his wife Park Min-yong at his neighbor’s house. During rehearsals, Park Min-young expresses confusion, so the actors discuss new ideas to improve the scene. The antics, jokes, and ideas of Park Min-yeon and Go Kyung-pyo continue as they diligently shoot the next few scenes.

At night, Park Min-yeon and Park Jae-yeon rehearse on the street, and the actress is given props to hide her face from the paparazzi. However, both the mask and sunglasses are too big for Park Min-yeon, so she has to resort to using a scarf, while Park Jae-yeon milo helps to adjust the glasses so that they fit her better.

Watch the full clip below and watch the next episode of “Love in Contract” on October 5 at 22:30 Korean time. KST!

Steve Harvey shared photos of kids dressed like him at school,...