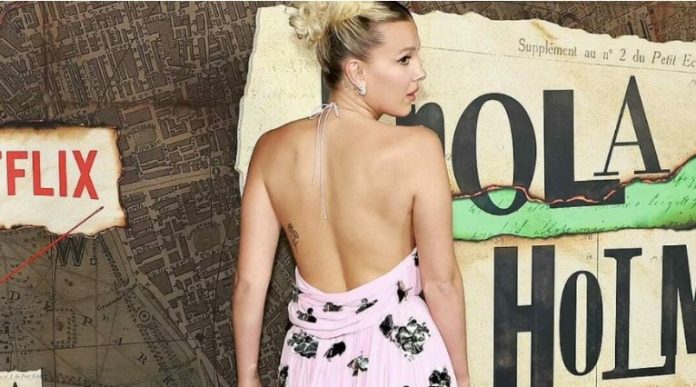 A new game is coming! Enola Holmes 2 will be here in no time to inspire young girls to fight in the coolest way. The historical drama, played by the very talented British actress Millie Bobby Brown, tells the story of Sherlock Holmes‘ younger sister, who in the 1800s turned out to be as astute as her brother. And as its release date approaches, celebrities are hyping it now more than ever. During the events, they recently graced the red carpet at the premiere in New York.

It is noteworthy that both Holmes brothers and sisters on the screen decorated the red carpet with their best halves in the most seductive outfits. While Cavill wore a pinstripe suit, a red tie and a Superman-style curl on his forehead. Brown wore a beautiful pink lace dress with black floral prints. Her hair was tied up in a high bun, which gave perfect goals for Barbie. That wasn’t all! Her dress with an open back helped the actress of the TV series “Stranger Things” to demonstrate her tattoos, and we could not help but share with you this information about our favorite youth icon.

The 18-year-old actress was dressed in a gorgeous light pink Louis Vuitton dress with an open back, which allowed her to show off her growing collection of tattoos. First, she has a 011 tattoo made in honor of her breakthrough character, Eleven. Her second tattoo is a cute little heart on her left collarbone.

In addition, she has a bouquet of flowers painted on her back, and her grandmother’s name, Ruth, is carved in beautiful italics on the right rib. MBB’s grandmother tragically died in 2020 due to Alzheimer’s disease. Brown told one of the reporters how long it took to create the dress.

She went on to say that the flowers hidden in her dress were chrysanthemums. Speaking about the premiere of the sequel, she said she was “still in shock” that the trailer had garnered such a huge number of views. Enola Holmes will be here in her seductive style of breaking the fourth wall and will send you on a journey to unravel the greatest mysteries of all time, only on November 4th.

In the meantime, let us know in the comments which MBB tattoos you like the most.

Emily Ratajkowski Appear in Milano Her Latest Post is Incredible