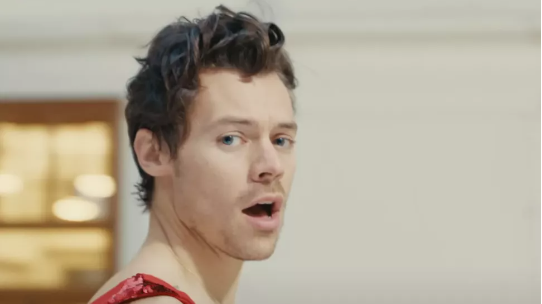 This week we lost a music legend due to the death of Christine McVie from Fleetwood Mac. She was one of the long-time members of the rock band, who wrote such hits as “Everywhere” and “Don’t Stop”. After the loss of Fleetwood Mac’s writer, vocalist and keyboardist, none other than Harry Styles paid tribute to her by releasing a cover of a song from the cult band’s catalog, which McVie composed and sang.

During a performance in Santiago, Chile, on Thursday evening as part of his mega-Love On Tour, the Don’t Worry Darling star surprised fans with a cover of “Songbird”. Check out a bit of Harry Style’s tribute to the late Christine McVie:

Styles performed “Songbird” just a day after McVie “peacefully” died at the age of 79 in a hospital surrounded by her family after a “short illness.” After performing the tribute, Styles blew a kiss into the sky. The former One Direction member is one of many musicians honoring Kristin McVie as much as they can after her recent death.

Harry Styles has not been shy about his love for Fleetwood Mac over the years. In the past, he said that the classic 1977 song “Dreams” was one of the first songs in his childhood to which he learned all the words. Styles has also been friends with Fleetwood Mac’s Stevie Nicks since 2015, when he gave her a birthday cake he baked himself, according to Vogue.

Styles also inducted Nicks into the Rock and Roll Hall of Fame, and Fleetwood Mac singer called him “the song she never had.” Styles used to cover “The Chain” during his tour, and he even shared the stage with Nicks, performing duets during concerts.

Harry Styles has had a huge year on the tour, which started in Glasgow back in June and lasted until July 2023. Since the summer, Styles has had several residences, notably at Madison Square Garden in New York and Kia Forum in Los Angeles. He is currently in South America and will remain there until mid-December. He will then take a month off before briefly returning to Los Angeles for three more concerts, and then traveling to Australia, Asia, and then Europe.

All this time, Stiles also spent a big year in Hollywood, starring alongside Florence Pugh and Chris Pine in the movie “Don’t Worry, Darling.” He also found romance on the set of the film, falling in love with director Olivia Wilde during filming, however the couple reportedly decided to take a break as he continues to travel the world. Stiles also starred in Amazon’s LGBTQ+ movie “My Cop.”

As we continue to mourn the death of Christine McVie, Styles couldn’t have picked a better song to pay homage to the Fleetwood Mac icon traveling the world.

Carol and Tuesday: Why did Dahlia end up famous?