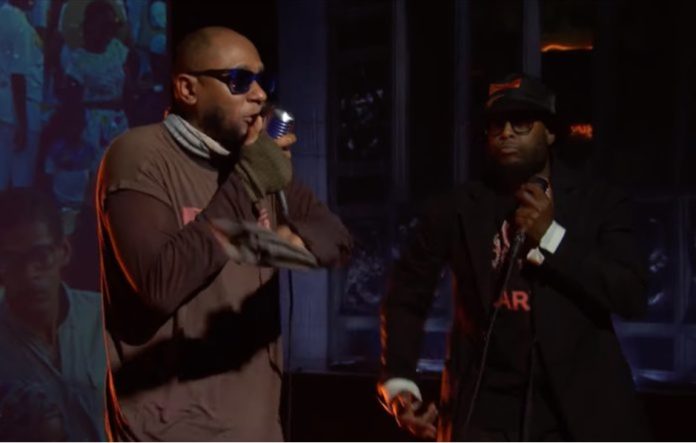 Yasiin Bey and Talib Kweli reunited earlier this year for the new album “No Fear Of Time”.

On SNL, they presented one of the highlights of the album, “So Be It”, on a show hosted by Dave Chappelle.

About the reunion of Black Star, Kweli said this year: “It’s very similar to how we recorded the first album. But there were no mobile studios on the first album. This whole album we have not set foot in any recording studio. All this was done in hotel rooms and behind the scenes of the Dave Chappelle show.”

Bey added: “What you will continue to receive from us is a sincere expression. This is who we really are, what we really respond to and what is really important to us.”

At the beginning of yesterday’s episode, Chappelle used his opening monologue to respond to anti-Semitic remarks made by Kanye West in recent weeks.

“I condemn anti—Semitism in all its forms and support my friends in the Jewish community,” he said. “And so, Kanye, you’ll buy yourself some time.”

“I’ve probably been doing this for 35 years, and at the beginning of my career I learned that there are two words in the English language that should never be pronounced together in a row, and that’s: “Jews,” he continued. “I’ve never heard of anyone doing good after saying that.”

The premiere of the 48th season of the show “Saturday Night Live” took place last month, when Kendrick Lamar performed three songs from the latest album “Mr. Morales and the big steppers.” Since then, Willow, Megan T Stallion, Jack Harlow and Steve Lacey have performed in the show.

As announced last night, SZA will be the next musical guest of the show, which will appear on December 3 after a two-week break.