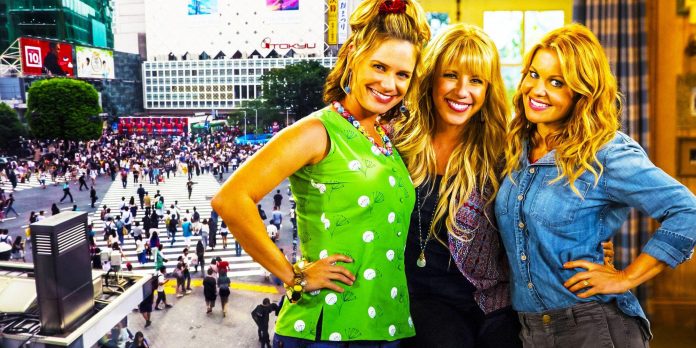 Were scenes actually filmed in Japan in the third season of Fuller House? The premiere of the Netflix spin-off “Full House” took place in 2016 and lasted five seasons. Most of the main cast of the original sitcom returned to the offshoot, including Steve Hale (Scott Weinger), who was an integral part of the story as Fuller House primarily focused on DJ (Candice Cameron-Bure), his widowed high school sweetheart.

Unlike Full House, which was about children, Fuller House focused its storytelling on adult actors such as DJ, Stephanie (Jodie Sweeting) and Kimmy (Andrea Barber). Apart from their relationship with their children, most of their respective arches were about their personal lives. For the DJ, it meant reuniting with her boyfriend from Full House, Steve. However, before they finally got together, Steve was engaged to CJ (Virginia Williams). In fact, the couple almost got married at a wedding in Japan.

Since DJ and Steve maintained a good relationship at Fuller House, the entire extended Tanner family was invited to the event in the third season. holidays. As it turned out, Netflix sent the entire Fuller House ensemble to Japan for a special occasion. Cameron-Bure, who was also the producer of the spin-off sequel “Full House”, promoted on her social networks a special behind-the-scenes look at the filming of actors abroad in 2017. urban episodes, the most famous of which is the one in which the whole family went on vacation to Disneyland. At the same time, the trips of the original series never became international, as it was in its by-product.

Although the main reason for this episode in Japan was to attend the wedding of Steve and CJ, whose stepfather is associated with the Yakuza, Fuller House made the most of this by including some fun side trips. Like a real clan on vacation, the actors visited some of the country’s best tourist spots, including the Sanrio Puroland Theme Park (AKA Hello Kitty Land) and the famous Shibuya Crossroads. In addition to DJ Fuller House, Steve and CJ’s love triangle, Ramona (Nicole Bringas) also had her own whirlwind romance in the Japanese episode of Fuller House in the third season. After being dumped by Jackson’s (Michael Campion) boyfriend, Bobby Popko (Isaac Presley), she met Marius Yo from the real-life band SexyZone and had a brief affair with the Japanese idol before eventually breaking up.

Fuller House only had one episode set in Japan, but it was an interesting way to connect with Full House, who also had special ties to the country. It’s worth remembering that Uncle Jesse (John Stamos) became so famous in the country several decades ago that he even brought his family there to visit. Unfortunately, the Tanners’ favorite rock star did not participate in the offshoot’s trip to Japan; it would be great to see if his popularity there will continue after all these years.