Home Entertainment Was Reginald trying to create a paradox after the first season of... 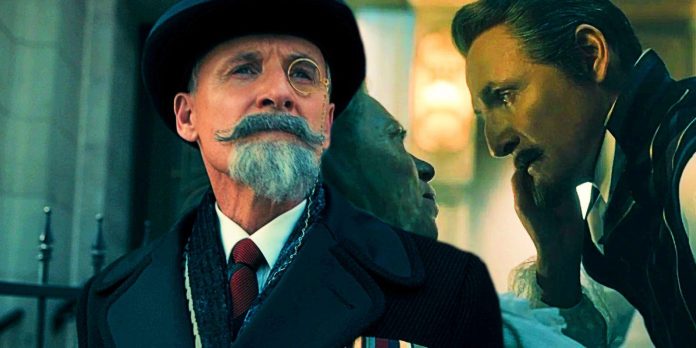 The Umbrella Academy season 3 revolved around the members of both the Umbrella Academy and the Sparrow Academy combatting a paradox, and various details make it possible that Reginald was setting everything up since season 1. Ever since the beginning of the show, it’s been clear that Reginald knew – and was involved with – far more than any of the Hargreeves knew. Reginald’s ultimate endgame in season 3 best exemplifies that, and the possibility of him having planned it out from the very beginning appears in line with what has been established both about the character and the show’s plot.

In The Umbrella Academy season 3, when Harlan Cooper accidentally killed the Hargreeves siblings’ mothers before they could give birth to them, he created a paradox that gave birth to a kugelblitz; a concentrated black hole slowly destroying the entire universe. The Umbrella Academy and the Sparrow Academy spend season 3 trying to stop the kugelblitz, but by the end of the season, they all accept their ultimate fate. However, Reginald tricks them into working to fix the universe by killing Luther and framing the guardian of the Hotel Oblivion for it, which then leads to him using them all for his own purposes.

Related: Why Reginald Hargreeves Is Alive In Umbrella Academy Season 3

Reginald Hargreeves’ season 3 plan involved the use of the Hotel Oblivion, a reality-warping machine in another dimension disguised as a hotel. After tricking the Umbrellas and the Sparrows into going into the Hotel Oblivion by killing Luther and framing the guardian for it, he got them to locate and ring the seven “bells” needed to activate the machine, which actually meant standing on seven stars near the entrance to the Hotel Oblivion. Activating the machine caused everyone – seemingly sans Allison, who was the only one not standing on a star – to have their powers drained and nearly be killed, but the machine still did what Reginald said it would do and reversed the destruction caused by The Umbrella Academy’s kugelblitz.

However, the universe wasn’t simply repaired and put back to normal. Reginald used the Hotel Oblivion to change reality, and while the full extent of what he’s done is unknown, he seems to be an even bigger celebrity than he was before and, most importantly, his wife Abigail has been brought back to life. This was Reginald’s ultimate goal for the Hotel Oblivion, and various details across the show could imply that he was setting it up as far back as The Umbrella Academy season 1.

How The Umbrellas & Sparrows Are Connected To Abigail Hargreeves

At the moment, there isn’t an explicit connection between Abigail Hargreeves and the Umbrella and Sparrow Academy, but The Umbrella Academy season 3 heavily implies that one exists. The opening to The Umbrella Academy season 3 revealed that the mysterious pregnancies that birthed the Umbrellas and the Sparrows came from their mothers ingesting mysterious glowing particles in the air, and those same particles were being drained from their bodies when Reginald was using the Hotel Oblivion. The particles are likely both the source of everyone’s powers and a vital component of the machine, and since Reginald seemed to specifically need the machine to bring Abigail to life, it’s possible that the particles that led to the birth of the Umbrella Academy and the Sparrow Academy came from Abigail somehow.

Related: What Happens To The Umbrella Academy’s Powers At The End Of Season 3?

If the particles did come from Abigail, then that could explain why Reginald decided to build a superhero team in the first place. With the particles appearing to be a key component for the machine, Reginald building the Hotel Obsidian around the gateway to the Hotel Oblivion would make the most sense if he already knew that he would need them, and if they truly did come from Abigail, then it would be easy enough to explain that Reginald knew that Abigail’s death would create the particles needed to power the machine. If that’s the case, then Reginald could have known that the Umbrellas and the Sparrows were born because of the particles which, in turn, would mean that he gathered them not simply to be superheroes, but to make the vessels for the particles strong enough to survive the Hotel Oblivion and power the machine for Reginald’s plan to come to fruition.

The idea of Reginald setting up his plan from the beginning makes even more sense when various details of The Umbrella Academy season 1 are taken into account. For starters, season 3 reveals that The Umbrella Academy’s Luther wasn’t sent to the moon because Reginald was getting rid of him, but because Luther was secretly being tasked with protecting Abigail’s corpse that was being housed on the moon. That means that Abigail’s corpse had been preserved for years, probably even before Luther went to the moon, so taking his endgame and the history of the Hotel Obsidian into account, that would mean that he had plans to bring Abigail back to life well before season 1 started.

Another hint at Reginald having long-term goals stems from how he knew that there would be an apocalypse in season 1. With Reginald apparently knowing that the world would end, it’s possible that he also knew that the Umbrella Academy would fail and would need to use Number Five’s powers to go back in time and stop it from happening. That idea also works with the fact that Sir Reginald Hargreeves needed seven people to power the machine, as he might have hoped the Umbrella Academy would change history in a way that would either keep Ben from dying or would allow him to have seven children in some other way, which is what ended up happening with the Sparrows. The season 3 finale made it clear that Reginald cared more about bringing Abigail back to life than he did saving the world, so with that in mind, the idea that he would be desperate enough to concoct an extremely elaborate plan such as this to bring her back isn’t impossible.

A lot about the depths of Reginald’s plans ends up being conjecture, but various details throughout the show do make it possible that he was planning everything out since The Umbrella Academy season 1 all the way up to season 3. Both the Hotel Oblivion and the Umbrellas and the Sparrows’ births imply a connection to Reginald’s wife, Abigail Hargreeves, and with the added context given to certain details from season 1, either implicit or explicit, it’s easy enough to conclude that Reginald had been working on Abigail’s revival for a long time to the point of possibly manipulating the events of The Umbrella Academy to eventually make it happen. With Reginald set to be the main antagonist of season 4, the full depths of his plans will likely be fully brought to light soon.

Savage: aespa Comes Back Stronger With Their Gripping MV