Home Entertainment Was Molly Ringwald in the episode “Bear 3”? 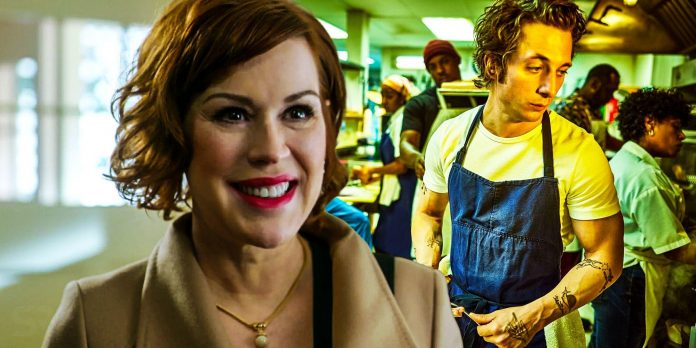 The cast of the first season of the TV series “Bear” on FX and Hulu will present several surprises, including an obvious cameo by Molly Ringwald. In the series created by Christopher Storer, Jeremy Allen White from Shameless plays Carmen “Carmi” Berzatto, a young chef who returns to Chicago to head The Original Beef restaurant, previously owned by his brother. Bear was praised for his realism in portraying what it means to work in the kitchen, including the dynamic nature of this lifestyle and the anxiety it can cause.

One of the show’s greatest strengths is the actors involved. The cast of “Bear” is led by the strong performance of Jeremy Allen White, but Ebon Moss-Bachrach and Ayo Edebiri also did a great job. There are also a number of surprises, as quite recognizable performers appear for small roles. Among them are “The Punisher” star Jon Bernthal, who played Carmi’s brother Mikey in flashbacks, and Joel McHale from “Community”, who played Carmi’s old boss.

Related: Explanation of the ending of the 1st season of the TV series “The Bear” (in detail)

Another surprise comes in the 3rd episode of the 1st season of The Bear, as the episode begins with Karmi attending an Al-Anon meeting. That’s where the moderator starts talking and a very familiar actress appears on the screen. Molly Ringwald plays the moderator of the Al-Anon meeting in episode 3 of The Bear. Her addition was a pleasant surprise, but the brevity of her appearance may leave some confusion as to why the former star of the Breakfast and Sixteen Candles Club plays such a small role.

Molly Ringwald was a member of the Brat Pack and a major star in the 1980s, but lately her filmography has been filled with small roles. She starred in the popular ABC family series “The Secret Life of an American Teenager” for five seasons until 2013. She then landed a recurring role on the popular CW series “Riverdale,” where she plays Archie’s mother, and later she joined the Netflix franchise “Kissing Booth.” Instead of acting in major films or TV shows, Molly Ringwald continued to find work, taking on small roles, for example, in “The Bear”.

Molly Ringwald’s “Bear” cameo in Season 1 of episode 3 may not last long, but she has an impressive role nonetheless. She is the moderator of the Al-Anon meeting, which is attended by the character of Jeremy Allen White. The character of Molly Ringwald in “The Bear” gives an emotional speech about her past with her alcoholic husband, how she played a role in his drunkenness and how it taught her to stay away from a toxic environment. What she says touches Karmi to the quick, even if he does not immediately fully assimilate the lessons she is talking about.

Gran Turismo 7, An Ode To Car Collecting: Everything That Awaits...