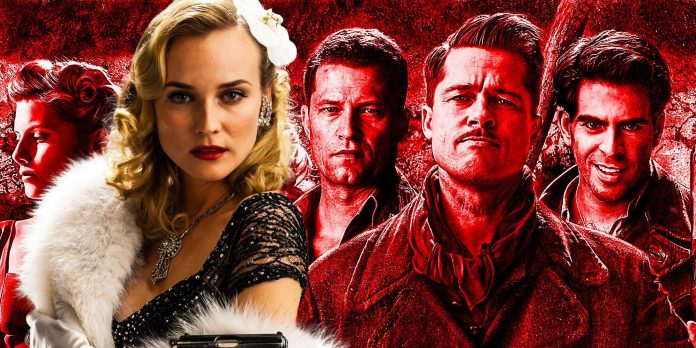 Quentin Tarantino’s Inglourious Basterds saw the Basterds’ plan, Operation Kino, not going exactly as they expected, with the first part of it going terribly wrong and leading to the deaths of some Basterds, with their ally, Bridget von Hammersmark, surviving the attack – but could it be possible that von Hammersmark had planned to betray the Basterds from the beginning? Quentin Tarantino has explored different genres throughout his career as a filmmaker, including alternate versions of historical events, as he did in Inglourious Basterds.

Set during World War II, Inglourious Basterds follows two stories with a common goal: kill as many Nazis as possible, including Hitler. One is the story of a group known as the “Basterds”, led by Aldo Raine (Brad Pitt), and the other is that of Shosanna Dreyfus/Emmanuelle Mimieux (Mélanie Laurent), a Jewish cinema owner whose family was killed by SS officer Hans Landa (Christoph Waltz) and is now ready for revenge. Killing Hitler was the common goal of the Basterds and Shosanna, and they came up with different plans to achieve that, which ultimately meshed and allowed them to complete their missions, though not without some obstacles in the way.

Related: Is Any Of Quentin Tarantino’s Inglourious Basterds True?

In order to kill Hitler and those closest to him, the Basterds came up with “Operation Kino”, which consisted of sending German movie star and undercover Allied agent, Bridget von Hammersmark (Diane Kruger), Lt. Archie Hicox (Michael Fassbender), and two of the Basterds disguised as guests to the premiere of Joseph Goebbels’ movie Nation’s Pride, as Hitler, Goebbels, and more would be in attendance. Unfortunately, the first phase of Operation Kino didn’t go as expected and the Basterds had to make some last-minute changes, but a theory suggests Operation Kino was going to inevitably fail, as von Hammersmark was going to betray the Basterds.

A theory, posted on Reddit, suggests Bridget von Hammersmark was going to betray the Basterds no matter what. The author explains that very little is known about von Hammersmark except that she’s a famous actress in German cinema and that, at some point, she decided to serve as a spy for the British, though exactly why it’s unknown. Von Hammersmark’s betrayal would have taken place at the tavern where she met Hicox and Basterds Hugo Stiglitz (Til Schweiger) and Wilhelm Wicki (Gedeon Burkhard), a place that happened to be packed with Nazi soldiers who were celebrating the birth of the son of one of them. Von Hammersmark’s plan would have been to lure the Basterds under the excuse of meeting up for Operation Kino, which would explain sending Stiglitz, an infamous former German soldier, to a place full of Nazis, as von Hammersmark expected the rest to recognize him and Stiglitz to lose his temper, thus blowing their cover off.

However, when the Basterds’ lies are caught by Major Dieter Hellström (August Diehl), a shootout happens between the Basterds and the Nazis, and the former, to von Hammersmark’s surprise, kill everyone except Sergeant Wilhelm. Von Hammersmark then shoots Wilhelm after he makes a deal with Aldo to let her go, which is seen as proof of her loyalty to the Basterds and Operation Kino, but according to the author, killing Wilhelm not only showed the Basterds that she was on their side but it also prevented Wilhelm from giving any information to the Basterds. The author points out that, as a double agent, von Hammersmark would have been more careful with the clues she left, and leaving her shoe and the autograph she gave Wilhelm at the tavern was intentional so the commanders knew she was there and thus would get to the Basterds.

Later, when the Basterds are attending to her wounds and begin to suspect she’s a spy and set them up, von Hammersmark tells them Hitler, Goebbels, and company will be at the premiere, which wasn’t exactly proof of her loyalty but a way to escape their torture as she was in a lot of pain, and giving them this information would lead them into another trap after the one in the tavern failed. Now, with the clues she left at the tavern, Hans Landa realized it was all a Nazi trap gone wrong and she left those clues so they could track her and the Basterds down. By the time Landa decided to join the Allies, he had already discovered that von Hammersmark was going to sabotage the Basterds’ attack at the theater, so he killed her so the Basterds could go on with their plan.

The main problem with the Inglourious Basterds theory about Bridget von Hammersmark planning to betray the Basterds from the beginning is that there isn’t actual evidence to support it. Von Hammersmark tells Hicox, Stiglitz, and Wicki that she didn’t know the tavern would be packed with Nazis, as they all arrived to celebrate the birth of Wilhelm’s son, so she had to play along and spend time with them while she waited in order to not raise any suspicions. The “clues” she left would have been very easy to forget due to the shock of the whole situation, and the autograph was in Wilhelm’s possession, as it was for his son. During the interrogation scene, von Hammersmark tells them the second part of the plan and refuses to go on with it as the others were dead, Aldo and company didn’t speak German, and she had been shot in the leg, and still attending the premiere was Aldo’s plan, not hers. The only thing that could put Bridget von Hammersmark’s actions in question is the tavern scene, as at first it could definitely be seen as her setting the Basterds up, but her actions after that made it clear that she was an ally.

Street of Fear 1994: What song does Ruby sing, killing people