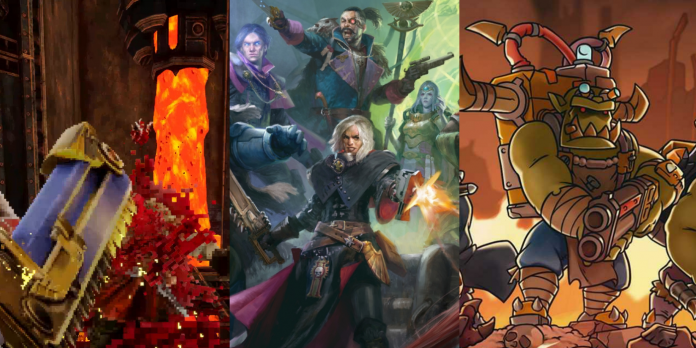 Tons of fantastic cinematic trailers, new game announcements, and tons of DLC for existing games ensure that Warhammer fans will be busy for the next few years. From the dark darkness of Darktide to the silly sadism of Shootas, Blood & Teef — every Warhammer fan will find something that can excite him.

Everguild, the developers of Horus Heresy: Legions, present a completely new card game set in the 41st millennium. Fans of previous developer games will surely be delighted with this new version.

Bring your basic dynamic card battles, characters from the real Warhammer 40k universe. It will be great to see new additions to the lore in 2023, such as the Primaris Paratroopers and the Followers of Innead in the form of maps.

For those who want to “hit the frail” minds of the Imperium, Shootas, Blood & Teef is the perfect game to quench their thirst for blood. This new 2D shooter, announced for the 20th October, will humorously give 40 thousand fans a comically cruel experience.

The player takes control of his own “WAAAAAAAAAAAAAAAAAAAAAAA!” to dominate the armies of the Imperium with superior strength and tactics. A new demo on Steam has just added a new Weirdboy level and class.

Battlesector is finally releasing the game’s newest gaming faction, Adepta Sororitas (Editor’s Note: Don’t correct the Adept in grammar), following the equally publicized inclusion of necrons this April. Players can now fight the enemies of the Imperium with the fury of the Battle Sisters.

In addition, a new horde mode will soon appear in Battlesector. Finally, players can recreate the staggering odds that an ordinary planet infected with xeno-chaos must overcome, knowing full well that they will die in the end.

Tacticus brings the fun of Warhammer 40k to the screens of players’ phones. Now fans can enjoy chaotic 40k tactical combat anywhere and anytime. In current news, Ultramarines and Necrons are presented as game factions.

In addition, in this tactical game you can also play for Astra Militarum, the Black Legion and Adept Sororitas. The exciting aspect is the multiplayer feature. Players now have tactical 40k entertainment with players without the need for an expensive table.

Vermintide 2 continues to expand its content with the release of the Be’lakor Chaos Wastes add-on. In this new map, players are forced to walk through the chaos-infested ruins of the First Prince’s domain. This will definitely include new tidbits of knowledge and more chaotic missions with friends.

The Vermintide 2 expansions also usually have gameplay changes. In this case, Be’lakor also infected familiar maps with Chaos corruption, giving players several new encounters from which they can get out with a fight.

Total War: Warhammer gives fans a break from the barrage of 40 thousand news and brings them back to Warhammer Fantasy. Their newest addition, Immortal Empires, combines maps to create the most ambitious campaign in the series.

In the third quarter of this year, fans of Warhammer Fantasy will finally be able to enjoy truly epic battles on a larger scale than before. With the addition of recent new races like ogres, Total War: Warhammer III promises to be incredibly ambitious.

Darktide reveals more about its setting, the doomed imperial world-the Atom Prime hive. Take control of a motley group of people from different sects of the Imperium and fight the cosmic horrors of the 41st millennium.

The trailer once again shows the amazing work of Jesper Kid, the composer of the Vermintide franchise. Finally, a playable psyker character was introduced, an exciting choice for purging heretics in Darktide.

Boltgun transports players to the past in different ways. Featuring an aesthetic reminiscent of Doom, players explore the 2nd edition of Warhammer 40k with intense violence in a first-person shooter.

The aesthetics of the fast-paced retro shooter of the 90s evokes nostalgia among many long-time fans of the 40k franchise. It also triggers a meme among Doom and 40k fans that Doom Slayer is actually a secret space marine who woke up on a demon-infested Mars.

Ever since Space Marine 2 was announced, fans have been clamoring for new news. They finally got exclusive behind-the-scenes footage in the new developer update trailer. Fans will get a closer look at some of the new levels and aesthetic design in Space Marine 2.