Last Friday (5), the first Marvel TV series on Disney + came to an end, WandaVision. Altogether, there were nine episodes telling the saga of Wanda, which created an alternative reality where she was able to relive her old love, Vision.

The initial episodes of the series had direct references to TV sitcoms, starting in the 1950s and continuing to the present day.

These comedy references were developed clearly on WandaVision, with the episodes being shown as if they were from an authentic sitcom, showing the life of Wanda and Vision in a small and peaceful town in the interior of the United States.

The emulation was so faithful that even commercial breaks were created to give it more authenticity. At first, the commercials seemed like just some production pranks, which would bring little Easter egss from the MCU.

However, as the series evolved and the viewer could see Wanda’s mind weakening, the commercials shown during the series were also gaining dramatic tones and with hidden meanings.

Check out a more detailed explanation of the real meaning of each of WandaVision’s commercials. 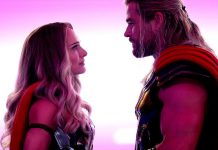 Arachnophobia is the perfect answer to Your Complaints about the horror...