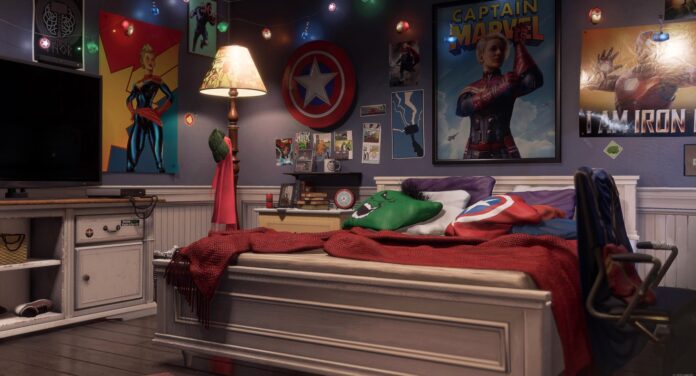 Marvel’s Avengers will bring gamers together with their favorite superheroes. A new clue that shows up shows that Captain Marvel can also be added to the game’s launch squad.

Marvel fans are eagerly awaiting Marvel’s Avengers, which will come from developer Crystal Dynamics and publisher Square Enix. On the other hand, delaying the game to the month allows Crystal Dynamics to develop the Avengers game with new heroes.

Crystal Dynamics continues to add new faces to the cast, while updating the models of existing characters until the game’s release. New images that Marvel’s Avengers shared on their Twitter account reveal that Captain Marvel may also join the team.

Marvel’s Avengers official Twitter account has released two new background images so that fans can use it in their backgrounds in video conferencing talks during their coronavirus days. The images belong to the room of Kamala Khan (Miss Marvel), one of the characters in the game. In addition, the room of our hero is filled with posters of Avengers members, of which he is a fan.

In the first of the screenshots taken from Kamala Khan’s room, there are details such as an “Iron Man Xing” sign at the door, a pouf on the shield of Captain America and a photo taken with the Avengers members. However, in the second image of the other side of the room, there are posters of Kamala’s idol, Captain Marvel. One of the posters displays the comic book look, while the other combines the comic book cover with the hero’s appearance in the Endgame movie.

Images shared by the developers on social media show that Captain Marvel can be added to the game during the launch and appear with his short-haired style in the Endgame movie. The costume may be somewhere between the outfit in the comic book and the MCU costume worn by actress Brie Larson. However, his face will probably not be similar to that of the MCU like other characters, and will be depicted according to the comics.

Crystal Dynamics first announced the playable characters to feature in the game as Captain America, Iron Man, Thor, Black Widow, Hulk and Miss Marvel. In addition, the developer stated that new characters will be added to the game with DLC. These images show that Captain Marvel might be one of the exit characters.