Home Entertainment Wait, why is there so much “Star Trek” in the Elvis movie... 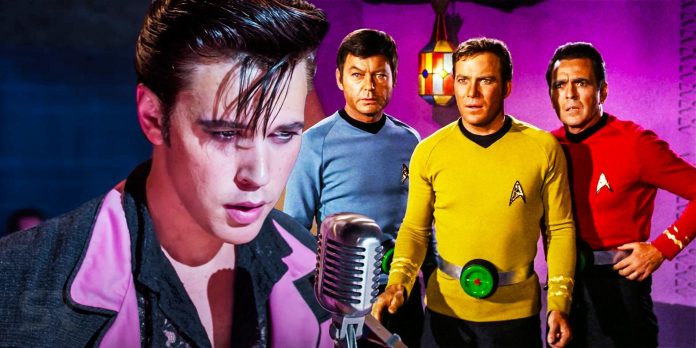 The big surprise about Elvis is how much the biopic references Star Trek, so was the king of Rock and Roll a fan of Captain Kirk (William Shatner) and Mr. Spock (Leonard Nimoy)? Directed by Baz Luhrmann, Elvis stars Austin Butler as Elvis Presley, whose life story is told by his manager, Colonel Tom Parker (Tom Hanks). Elvis also stars Olivia DeJong as Priscilla Presley, Richard Roxburgh as Elvis’ father, Vernon Presley, and Helen Thomson as Elvis’ mother, Gladys Presley.

Elvis is told in flashbacks through the memories of Colonel Tom Parker, who tells the story from his deathbed in 1997. Elvis depicts how Parker, who prided himself on being a “snowman” who knew how to extort money from people at carnivals, found out about the young Elvis Presley, who signed a contract with Sun Records in the late 1950s. Presley grew up among African Americans in Tennessee, and Elvis was able to combine black music with country music to create his rock and roll sound. Elvis depicts how Parker took Presley under his wing and turned him into the biggest recording artist in America before they were forced to recruit Elvis into the army for two years. While the singer was serving abroad, Elvis met the young Priscilla Beaulieu, who became his wife and the mother of their daughter Lisa Marie. When Elvis resumed his career, he became a Hollywood movie star, but the cultural changes of the 1960s bypassed him. Parker inspired Elvis to become a regular headliner at the International Hotel and Casino in Las Vegas, but the manager also trapped his protege and insulted him to pay off his gambling debts. Addicted to drugs and on a downward spiral, Elvis Presley died in August 1977 at the age of 42. Meanwhile, “Star Trek” repeatedly and curiously pops up in Elvis’ memory.

The next time “Star Trek” will be seen in Elvis is when Presley appears in the 1968 NBC Christmas special. As Elvis changes the special’s schedule to perform his old hits and new material instead of Christmas carols, Colonel Tom Parker leads sponsors from Singer sewing machines to the NBC control room. They transmit photos of several “Star Trek” actors in costumes, including Captain Kirk played by William Shatner, Mr. Spock played by Leonard Nimoy and Lieutenant Uhura played by Nichelle Nichols. After that, Elvis is heartbroken over the murders of Robert F. Kennedy and Martin Luther King, who convinced Nichols to stay on Star Trek when the actress intended to leave the show.

As a child, Presley loved comics and science fiction, and his favorite superhero was Captain Marvel Jr., whom Elvis later modeled on stage. Unsurprisingly, Elvis also loved Star Trek, and many of the actors who starred in the Gene Roddenberry show also worked with Elvis in his films. Celeste Yarnall, who appeared in the Star Trek episode “Apple,” co-starred with Presley in “Live a Little, Love a Little,” and an excited Elvis told her that he named one of his horses “Star Trek.” In real life, Elvis was a big fan of Star Trek, so his inclusion in the Elvis movie is a fitting part of his homage to the king of rock and roll.

Forza Horizon 5 Becomes The Best Premiere In Xbox History During...