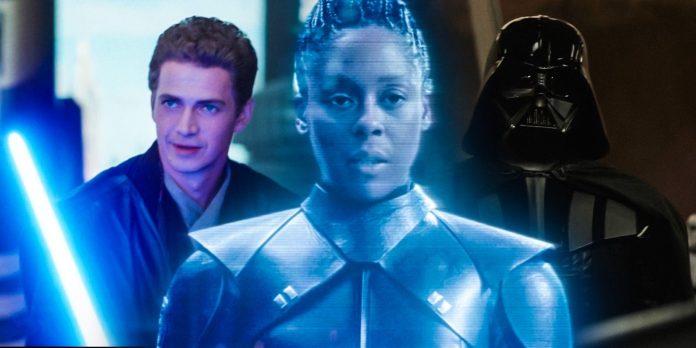 Warning: spoilers of the fifth episode of Obi-Wan Kenobi.

Obi-Wan Kenobi, episode 5, Reva doesn’t really explain how she knows Darth Vader’s true identity. It was through the character Moses Ingrams from Star Wars that Obi-Wan learned the startling truth about Anakin’s survival. Knowing that her words would shock him, Reva told Obi-Wan that Anakin had survived his defeat on Mustafar and was now hunting him as Darth Vader.

Her knowledge of the fact that Anakin Skywalker and Darth Vader are one and the same naturally raised some big questions about her character, especially since his identity had to remain a secret. In episode 5 of Obi-Wan Kenobi, what she knew about Anakin turned into a major plot point. Having raised this question, Obi-Wan put two and two together and found out that Riva was a Jungling who survived the massacre at the Jedi Temple staged by Anakin during Star Wars: Episode III — Revenge of the Sith. Reva then confirmed Obi-Wan’s claims and confessed her plans to betray Darth Vader. So while Reva is still a Star Wars villain, it’s unknown that she’s never been on the side of the Empire. She was just chasing Obi-Wan to serve her interests.

After the big turn, there was a feeling that the secret of how she learned the secret of Darth Vader was revealed. However, this explanation does not give a complete answer to the question. Even if she had witnessed his bloody fun and his potential for evil in Revenge of the Sith, that in itself should not have confirmed that he was Darth Vader. That would be a reasonable assumption for her, based on his killing the Younglings, only if the Empire hadn’t tricked the world into believing that Anakin was dead. Since she must have heard that Anakin died on Mustafar, it makes sense that she would have believed that Darth Vader was someone else. After all, he wouldn’t be the first Force-sensitive person to embrace the dark side.

Reva’s shocking disclosure by Obi-Wan Kenobi has shed a lot of light on her Star Wars backstory, but at least one piece of the puzzle has yet to be solved. If this isn’t a plot hole, something must have happened for Reeva to connect Anakin with Darth Vader. She may have found out the truth, but what Obi-Wan Kenobi told in the fifth episode is not enough to properly clarify the mystery.

She could have found out about it in various ways, for example, after hearing a clone call him “Darth Vader” in the Jedi Temple. Alternatively, Riva may have stumbled upon the Empire’s attempts to hide Anakin’s survival and then pieced it all together. Since Reva managed to survive being wounded by a lightsaber at the end of the episode, the season finale of Obi-Wan Kenobi will have the opportunity to explore this aspect of her backstory and how she went from Jedi Youngling to inquisitor in the Star Wars universe. .

Books that will be adapted for series and films