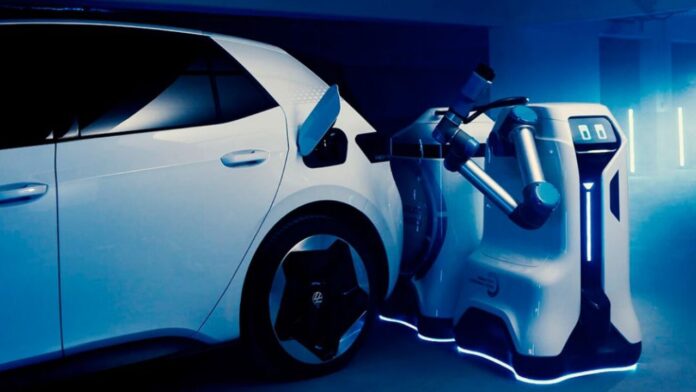 German automaker Volkswagen shared a video showing how mobile charging robots, which are expected to be produced in the coming years, will charge the vehicles. Mobile robots that move on their own can perform all steps of the charging process without the need for any human intervention.

Wolfsburg-based automobile giant Volkswagen is one of the companies that has switched to electric car production in recent years. The German giant, which aroused great curiosity with the ID series that will take its place on the roads in the coming years, is also working on ‘mobile charging robots’ that will charge these vehicles.

Volkswagen, which showed how robots will work for the first time in a promotional video released today, believes this charging concept will expand its charging infrastructure in the next few years. These artificial intelligence-powered robots are expected to help charge vehicles fully autonomously in places such as underground parking lots.

How does VW’s robot to charge electric cars work?

The charging robot, initiated via an app or signals directly from the vehicle, can communicate with the vehicle independently, from opening the cover of the charging socket to plugging and unplugging, and requires no human intervention. The robot can also charge multiple vehicles at the same time.

The operating logic of the system is as follows: When a car approaches, the robot autonomously goes to the side of the vehicle, connects the battery to the vehicle via an extension arm and leaves the mobile battery there to take care of other vehicles. When charging is complete, it returns to disconnect the cables and close the charging cover.

The German automaker announced the mobile charging robot as a concept a year ago. The company, which has now moved the concept to the prototype stage, plans to place the prototypes in parking areas where parking spaces are limited in the coming years. So, what do you think of Volkswagen’s ‘mobile charging robots’? You can share your ideas with us in the comments section.

Cyberpunk 2077: How to complete Death will visit you