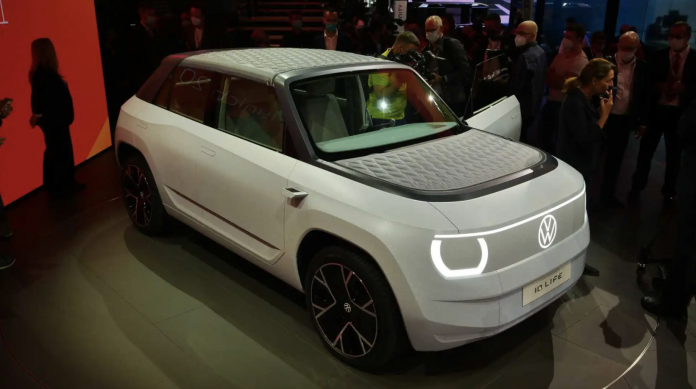 Volkswagen introduced its new concept electric car, ID.Life. This vehicle goes beyond the brand line with its dimensions and portable structure.

The biggest obstacle to electric cars today is their high cost. Since the production costs of ordinary internal combustion vehicles are quite low compared to electric cars, many manufacturers are having difficulties in transitioning to electric vehicles.

Volkswagen plans to reduce these production costs in the not too distant future. Introducing the city-friendly, small-sized, electric concept vehicle he named ID.Life, he gives us clues as to where the brand’s path will take.

What will the interior design of ID.Life be like?

Volkswagen is considering making a small city vehicle. The German manufacturer came up with a model that is 410 centimeters long from bumper to bumper, 184 centimeters wide and 160 centimeters high, which we can call a high hatchback or small crossover, which is similar to Hyundai’s Venue in this respect, but allows users to remove its roof.

Volkswagen, which wants to appeal to young buyers with its ID.Life electric car, has offered an interior where we can feel comfortable, like a saloon, despite its small size. Trying to keep the interior design as simple as possible, the German manufacturer added an 86-centimeter screen to the front instrument panel, but we cannot use this screen as an infotainment system. Instead, a screen has been added on the front console that can be opened optionally and that we can use for radio, navigation, music, movies and even playing games.

What awaits us under the hood of ID.Life?

Unlike other electric cars, Volkswagen has made a big change and included a front-wheel drive system in this vehicle. This vehicle has a full 234 horsepower and 290 newton-meter torque.

Thanks to the high acceleration provided by the electric motor, a 62 kilowatt-hour lithium-ion battery, which offers a maximum range of 400 kilometers for this vehicle, which accelerates from 0-100 in 6.9 seconds, seems to be quite sufficient for now.

Volkswagen especially emphasizes ID in this car. This vehicle is only a concept for now, so we don’t have a chance to go and buy it. However, the news that this vehicle is the first prototype of a model expected to go on sale in 2025 is also very likely to be true.

If Volkswagen wants to start a series with this electric car, it’s easy. Because it will be very easy to name, like ID2, ID3, ID4. If this vehicle were to be released tomorrow, the prices could be much different. However, if it comes out in 2025 as expected and can bring down electric car production prices as Volkswagen mentioned, the base price is expected to be 20 thousand Euros.