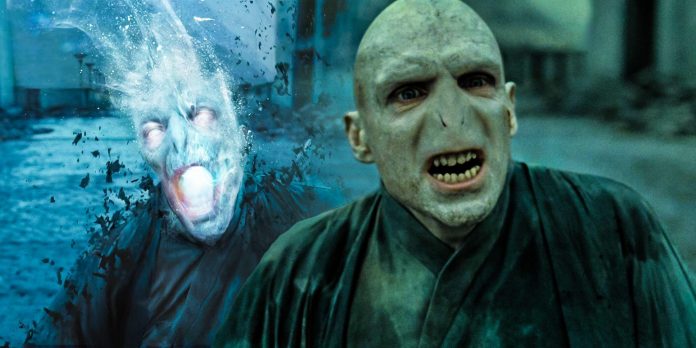 Voldemort’s death in concept art was a much better spectacle than his death in ashes in the cinema, but it was too disturbing for the already dark ending of Harry Potter. When Voldemort turned to ashes, it disappointed the fans. In the books, Voldemort’s body was proof that he died, as any ordinary person would have died. Although one theory about Harry Potter suggests that Voldemort’s death was a reflection of his character’s development in the films as he gradually became less human, Andrey Ryabovichev’s concept art would have made his death in the film much better.

Ryabovichev’s concept art [via heyuguys] of Voldemort’s death not only looked better, but also corresponded much more to how Voldemort was portrayed in the series. Their disturbing nature prevented their actual use in the film, so that the filmmakers would not alienate their young audience, as Voldemort’s nose is shown to be even more deformed. Various versions of Voldemort’s death put forward by Ryabovichev showed that he wanted to include the ghostly darkness that enveloped his image in earlier films. Offering Voldemort’s soul as a lighter would solve inconsistencies in books and movies. He kept the ghostly theme of the previous films and clearly contrasted with his darkest presentations. He would also have included Voldemort’s portrayal in the book as more human after death if the filmmakers wanted to add a level of complexity to Voldemort’s villainy.

However, this version of Voldemort’s death would be a much more disturbing sight. Voldemort’s redesign in the film has already made him more creepy than in the books, but in this concept art his face has become grotesquely deformed, which would be a nightmare not only for their young viewers, but also for more mature ones. By this point, the last films had become very dark, and the filmmakers did not want to alienate the audience from the final part of such an epic series.

This concept art could correct inconsistencies not only in the images of Voldemort in the movies, but also in the way he was presented in books. However, it cannot be denied that it was a much more disturbing image than his last movie scene. Although Ryabovichev’s concept art looked more spectacular than his death scene in the film, it showed the difficulties filmmakers face trying to balance their audience for TV series like Harry Potter.

The Reason Why The Facebook Logo Is Blue: What Is The...