Home News A Volcano in Russia Blows Ash to 10 Kilometers 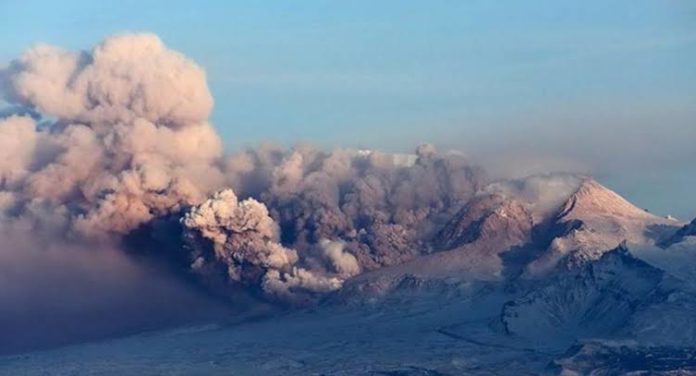 Şiveluç, the most active and constantly erupting volcano in Russia’s Kamchatka Peninsula, erupted. According to information obtained from the volcano, after the explosion sprayed ash to a height of 10 kilometers.

Şiveluç volcano, which is the most active volcano in the north of Russia, is known as the most active and continuously erupting volcano in Russia’s Kamchatka Peninsula. According to the latest information, the Şiveluç volcano has started to operate again and there was an explosion. As a result of the explosion, the volcano is said to have sprayed ash to a height of 10 kilometers.

The explosion forms a dense ash cloud behind it and is in motion, while the ash cloud does not have any settlements on its route. Kamçatka Volcanic Incidents Emergency Response Team in the explanations about the incident, said the explosion reached to a height of 10 kilometers with the data obtained from satellite images.

Kamchatka airspace was closed to flights:

Lava began to flow after the explosion continued to flow towards the northeast of the volcano was recorded. Although the Russian Ministry of Emergency Situations did not have any settlements on the route of the ash cloud coming out of the volcano, Kamchatka region’s airspace was closed to flights for a while due to a possible danger and the ash clouds affect flights.

The volcano of Şiveluç, which formed 60 to 70 thousand years ago, had its biggest eruption on 12 November 1964. With this huge explosion, the volcano had sprayed ash to a height of 15 kilometers. Although not so big, it is said to be a big explosion.

Şiveluç volcano, last October 2, as well as spraying ash to a height of 9 km in recent years also caused active explosions and orange alarms were given in the region. The volcano erupted in 1925, 1944, 1950, 1964 and 2010 and it is stated that the volcano is approximately 3 thousand 300 meters long.