Presented in October of last year, the vivo Y19 may soon gain a new generation, something that was reinforced by the approval of a device baptized as vivo Y20 and which had approval at SDPPI, thus showing that the brand’s planning is to present it soon in Indonesia.

Despite revealing little about the device, the certification confirms that vivo Y20 may also be known as vivo V2027A, thus helping to locate more information about the device, which includes passing it through the Geekbench benchmark application.

According to the information seen in the card available on the Geekbench server, the device has a chipset signed by Qualcomm and a motherboard identified as “Bengal”, but it is not clear which model will be embedded in the device, given that this card is normally seen in rumors like related to the Snapdragon 460 and 662, which were made official earlier this year.

Additionally, it will feature at least one setup with 4GB of RAM and Android 10 on board, possibly being the basis for Funtouch OS, the brand’s official customization that is present on its devices around the world. 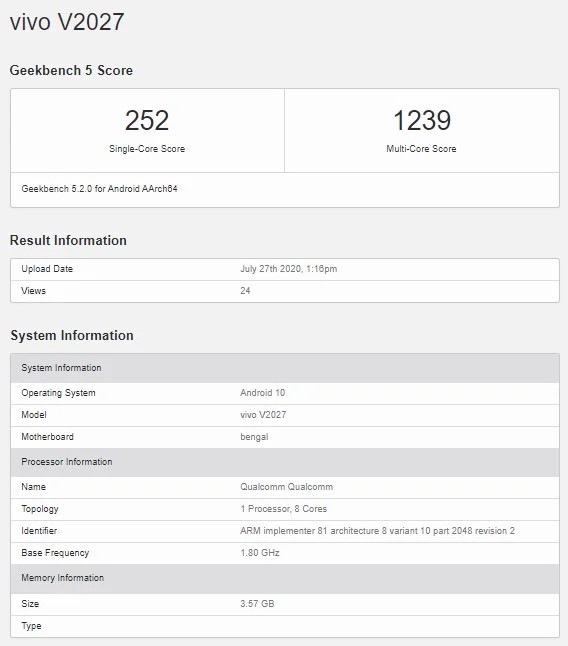 In results, we have that the device obtained a total of 252 points in single-core and 1,239 in multi-core, something that reveals its vocation as an intermediate device, which is expected considering that it is part of the line focused on cost- brand benefit.

The expectation is that, in the coming months, we will start to see more information on vivo Y20 appear until its launch, something that should happen later this year, if we consider the anniversary of vivo Y19 in October.

343 confirms Halo Infinite multiplayer to be free to play

Druckmann denies that its duration is a matter of marketing