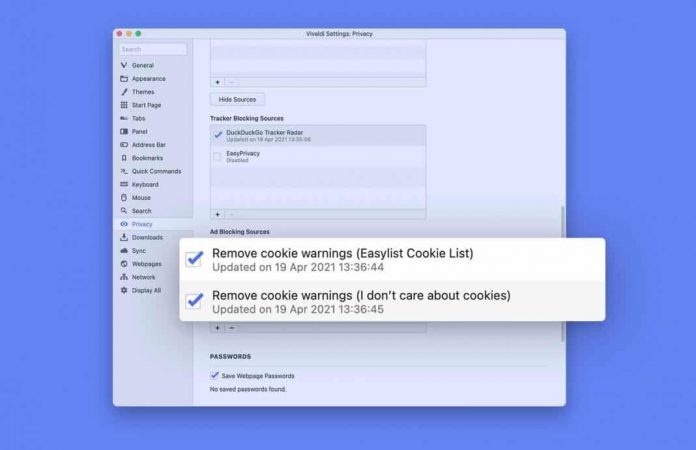 Vivaldi announced yesterday that it has updated the desktop and Android versions of the internet browser to prevent cookie preferences pop-ups. With the entry into force of the European Union General Data Protection Regulation (GDPR), you have had to click at least one dialog box asking if you want to manage how a site you visit will track you. The Vivaldi 3.8 update allows you to avoid these notifications, along with some important warnings, while theoretically keeping you from following.

The logic of the new feature Vivaldi calls “Cookie Crumbler”, which we can translate as “cookie crusher”, gives users control over how they are tracked, while doing this via a pop-up causes “allow” or “accept” to inadvertently click on it. is to open. Users inadvertently gave viewers permission to create behavioral profiles about themselves. ” says Vivaldi.

Vivaldi built-in Ad Blocker could theoretically take care of hiding users from the various tracking methods implemented by sites, so Cookie Crumbler is more about removing annoying cookie notification windows. Users with an updated version of Vivaldi (version 3.8 as of yesterday) can enable Cookie Crumbler by following Settings> Privacy> Trackers and ad blocking> Manage resources> Remove cookie alert lists. The same feature can be enabled in the Android version of Vivaldi under the same menu path.

Cookie Crumbler makes use of two separate third-party block lists to work, but “this is not the perfect solution because there will be several websites using other tactics to obtain cookie consent,” says Vivaldi. Enabling Cookie Crumbler may make some sites completely inaccessible on desktop and mobile devices, depending on whether the site locks some functionality behind interacting with the cookie dialog. Losing access to some websites is a major inconvenience for a web browser designed to visit websites, and this may be the reason Cookie Crumbler is not enabled by default.

In addition, Vivaldi takes an even stronger stance on the FLoC or Federated Learning of Cohorts system that Google plans to bring as a cookie alternative. FLoC creates cohorts from users’ browsing history to rank them semi-anonymously by interests or attributes for websites that want to sell ads. This seems less straightforward than a traditional cookie, but at the same time, how browser manufacturers implement it correctly is crucial to be safe.

Vivaldi is absolutely unhappy with Google’s implementation of FLoC and does not enable it in its browser, although it depends on Google’s Chromium codebase. With its latest update coming yesterday, Vivaldi blacklists the FLoC component required for Google’s current testing of advertising technology, removes it from browsers that may already have been downloaded, and prevents future downloads.

In addition, Vivaldi 3.8 adds new customization options for the browser’s Panels feature (think SlideOver on iPadOS for websites) and a new keyboard command for adding bookmarks. The Android version of the application can now switch between 41 languages ​​supported by Vivaldi instead of relying on Android’s built-in language settings.

Telegram Has Been Updated! Here Are 5 Great New Features