Vitalik Buterin, CEO of Ethereum (ETH), answered users’ questions at the Ask Me Anything (AMA) event. Buterin, who answered many questions until the Ethereum 2.0 update, made a new post about the event.

Ethereum CEO Vitalik Buterin, who shared a post about the AMA event on Twitter, said that he touched a point he thought was very important, but it was overlooked and shared the visual of his statement at the event. In the image, “What is the maximum supply of Ethereum?” seems to be asked. Buterin answers the question by approaching it from a very different point. 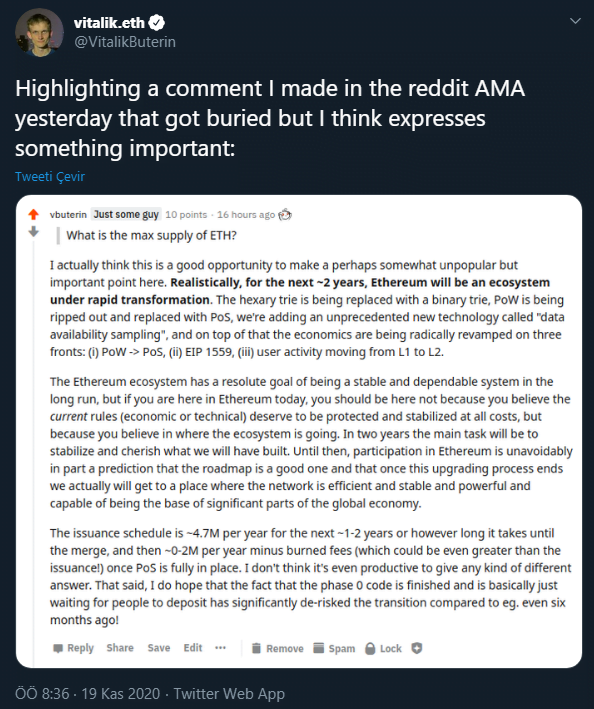 What is the issue Vitalik Buterin is focusing on?

Vitalik Buterin gave a long answer to the question asked by the user. Buterin started his speech by stating that he wanted to make an important point and mentioned that the Ethereum ecosystem will be under a great change in about two years. Stating that new technologies are constantly being brought to the Ethereum network with examples such as PoW – PoS, Buterin said that they aim to make the Ethereum ecosystem a reliable and stable system in the long term.

“If you are in the Ethereum network, you should be here at all costs because of your belief in the ETH ecosystem. In two years, we will have done everything to stabilize and protect everything we build. Until then, we will see that the upgrade process is efficient, stable, strong and occupying an important place in the global economy. ”

Stating that in the next 1-2 years, when the PoS system is fully active, approximately 4.7 million ETH will be added to the supply, and then this rate will decrease to 0-2 million, including the wages burned. The CEO, who did not find it appropriate to give a different answer to this question, said he wanted to see that phase 0 ends and that users are trading on the network without risk.

Optical illusion: how identify the right colors with Photoshop

These are the free PS Plus games for PS5

Scott Disick may have been Coronavırus